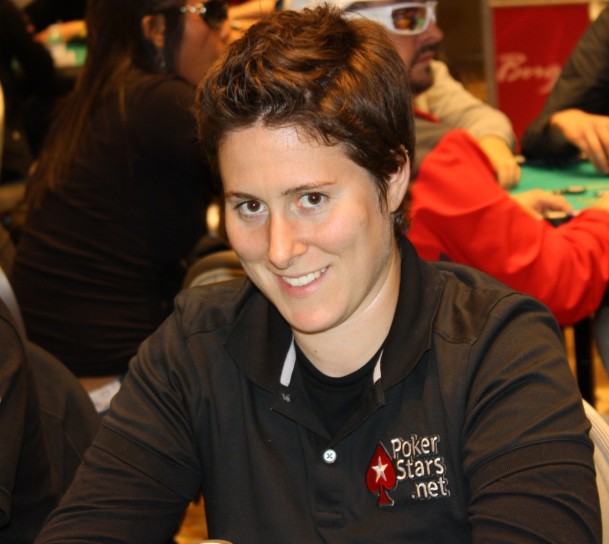 Vanessa Selbst, whose victory in the $100,000 NLH Shootout at the Aria meant she was the top woman poker earner for the third year in a row in 2015. (Image: highstakesdb.com)

You can’t really say that women in poker throughout 2015 offered any one standout, headline-grabbing female performance.

There was Jennifer Harman’s “it’s about time” Poker Hall of Fame induction, of course, but that’s more about long-term recognition than anything specific she accomplished this year.

Of course, the world’s top female poker players were cashing consistently (when they weren’t appearing in Celebrity Big Brother), but there was nothing on the scale of 2014, when Victoria Coren Mitchell became the first back-to-back EPT winner, for example, and Vanessa Selbst won her third WSOP bracelet.

In fact, despite having a relatively subdued year (by her own meteoric standards), Selbt’s performance in the $100,000 NLH Shootout at the Aria, where she picked up $1,000,000 for first place, was the highlight of her poker year. It was also enough to fire her to the top of the female money list for 2015, a standing she has achieved for the last three as well.

There were no agonizingly close runs towards the final table as there were in 2011, when Elisabeth Hille and Gaëlle Baumann came so close. The last woman standing at this year’s main event was Kelly Minkin, but more about her later.

Barbara Enright, incidentally, remains the only woman to have made the WSOP final table, and that was back in 1995.

The discussion about why women are so relatively under-represented in the game continued, of course, in 2015.

Some maintain that women are turned off by the fact that, during live poker tournaments, they must not only negotiate the whims of the poker gods, but also the casual chauvinism and occasional downright aggression of the male-dominated fields. It raises questions, once again, about the level of female participation in poker tournaments, which still tends to hover around the dismal four percent mark.

One woman who appeared to be impervious to these male dominated fields was the aforementioned Minkin. Not only was the 28-year-old from Tucson the last woman standing at the Main Event, she cashed in five WSOP events in total, grossing $603,680 across the year.

Close behind her was the UK’s Liv Boeree, who came in third at the EPT Barcelona 8 Max Super High Roller, for an annual total of $539,619. And meanwhile, Loni Hardwood’s victory at the WSOP National Championship, at Harrah’s Cherokee in North Carolina, catapulted her into fourth place on the yearly standings.

And yes, let’s take a moment to go back to the 2015 Poker Hall of Fame. Finally this year, the HOF inducted Jennifer Harman for her services to the game and her generally awesome skills at the felt.

The honor made her feel “freakin’ unbelievable,” she said.

I really love to watch these female players…they are tricky players, and hard to read, compared to males.
Best thing I have noticed, is they don’t hide their mouths…Men are drawn to this personal feature, instinctively, like a butterfly to a flower.
They can mis-guide a man’s read on them! 😀

At times, and with total respect, Vanessa loses her temper too often. She could be the gentile female version, of the ‘old’ Phil Helmuth!
But she is good at playing her chosen hands, and always in position.
Hope she wins more!