We left Wednesday’s recap of the Women in Poker Hall of Fame induction ceremony with tears in our eyes. WPT CEO Adam Pliska gave an impassioned speech about Angelica Hael, and that set the tone for more emotional moments inside the PokerGo Studio. 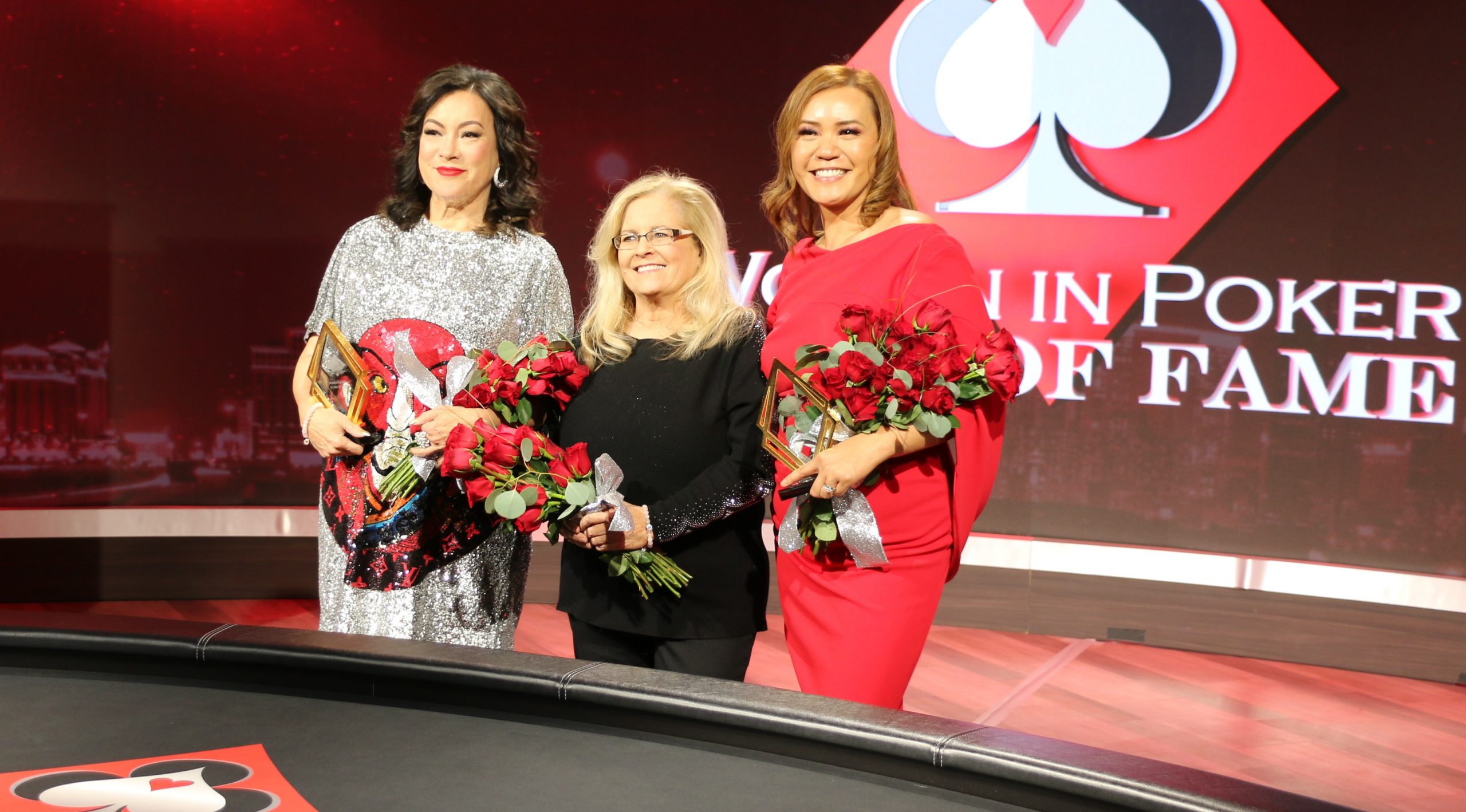 Women celebrating women is great, but everyone needs to see poker from a different perspective to create an even playing field. (Image: Daniel Smyth/CardsChat)

The WPT may have stolen the early part of the show but, as Women in Poker Hall of Fame founder Lupe Soto told us, the real winners are the ladies who play. Drake said, “we started at the bottom, now we’re here,” and here is a lavish venue in Las Vegas.

That’s an important piece of the story. The first Women in Poker Hall of Fame induction ceremony was held at Binion’s back in 2008. Exposed plumbing, peeling paint, and a carpet with unspeakable blemishes on it were the only frills to speak of.

Despite having a production budget of just $300, it was still a celebration. What it wasn’t, however, was an occasion like we saw this week. Thanks to PokerGo’s Mori Eskandani and a team of sponsors, this year’s budget was significantly more than $300, and it showed.

Once Hael left the stage with a trophy in hand, it was time for the king to rise. Terry King, in her own words, isn’t a familiar name to modern poker players. However, in the history of women in poker, she’s iconic.

King moved to Vegas when she was 18 with $200 in her pocket. An aunt was her point of contact and, without a plan B or return ticket, she needed to grow up fast. Fortunately, a poker table was her classroom and she had some of the best teachers in the game.

Life lessons from poker greats such as Doyle Brunson and Chip Reese allowed King to graduate from the $1/$3 Limit Hold’em games at the Dunes. King also lived the high life for five years with Reese, a period she still treasures to this day.

Then came a stint running poker rooms, including the Bicycle Club. Time on both sides of the felt has given King a life that few could have but many would wish for.

“Poker has been a wonderful life for me, and I can’t imagine being anywhere else or doing anything else,” King said.

Poker is King’s life and she’s keeping the legends alive with her popular Facebook posts. Now, thanks to the Women in Poker Hall of Fame, Terry King’s own legacy will live on.

“I’ve met everybody in this room through poker. I can’t think of anyone I haven’t met because of poker. It’s been a wonderful life,” King concluded.

Support was key to Selbst’s success

Vanessa Selbst couldn’t be at the ceremony due to prior commitments, but she dialed in via a recorded message. Of all the women inducted into the Hall of Fame, Selbst is the most successful in terms of prize money and titles.

She’s won three WSOP bracelets and has over $12 million in tournament earnings. Add to this a strong presence online through her cash game exploits and DeucesCracked training videos, and Selbst is a proverbial beast in poker.

Those achievements led to her having a long working relationship with PokerStars, a company she thanked during her acceptance speech (see videos below).

Thank you so much to the @WIPHOF, @PokerLupe, @Jan_Fisher, and to @MariaHo all whom i didn’t thank individually but helped create a beautiful event. Truly honored. Congrats to Jen, Angelica, and Terry too. I think my acceptance speech got cut off a bunch so wanted to post it here pic.twitter.com/Ev0aXTESZG

However, for all the professional support she received, nothing compared to the stability her wife offered.

“[My wife] has been an enormous point of stability throughout a career that can often feel destabilizing. Having someone with you that is always in your corner is so tremendously important,” Selbst said.

That’s an important point and one that Women’s Poker Association President, Tara Smith, made during her speech.

“It takes a village to build things. WPA is a village. It’s a community that uplifts women,” said Smith.

Villages often start at home, and Selbst’s success proves that. The more villages we can nurture and connect, the more Vanessas we can create. And, as she said during her speech, if the industry can do that to the point someone challenges her all-time earnings record, she’s coming out of retirement.

Closing out the ceremony was a star in two fields. Jennifer Tilly might be known to the world at large as an actress but, in poker, she’s another trailblazer. She’s brought mainstream attention to poker and, importantly, women in poker.

A Hollywood star shining a light on the game is great, but she’s not just a poker pinup. Tilly has been a student of the game ever since she met Phil Laak. He gave her a list of poker strategy books to read and, unlike nine people before her, she read them. 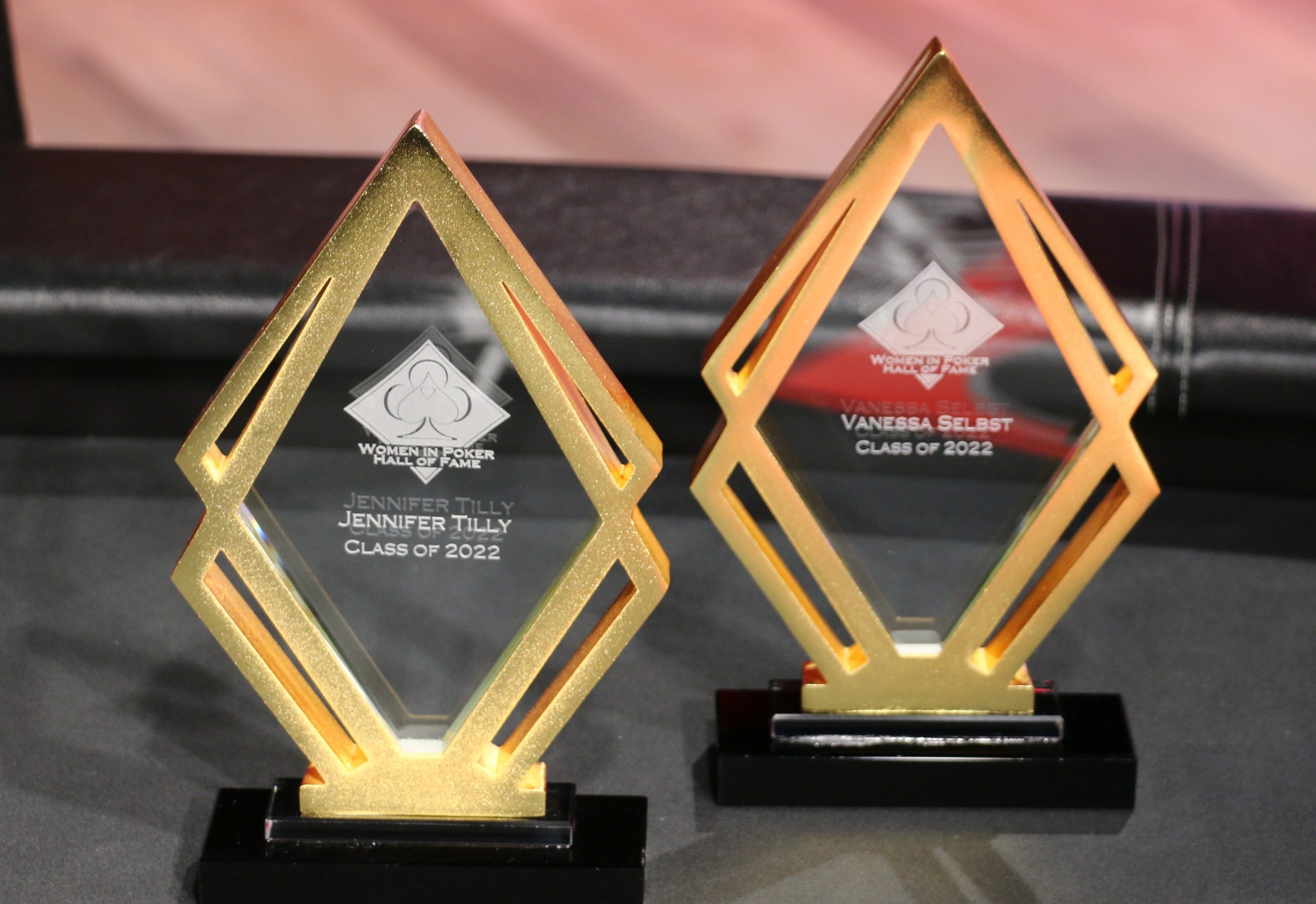 Jennifer Tilly and Vanessa Selbst were among those honored this week. (Image: Daniel Smyth/CardsChat)

She didn’t just read them, she made notes, asked questions, and immersed herself in the theory of poker. Despite Laak’s best efforts to keep her under wraps (i.e., away from any single poker players who wanted to date her), Tilly burst onto the scene and, within a few years, she’d won a million.

Laak was “blown away” and, so it seems, were the Women in Poker Hall of Fame judges. Her fame and fortune are impressive, but it’s Tilly’s attitude toward poker that really matters. She sees the game as a pursuit anyone can enjoy.

“Women can play on an even playing field with men. It’s not about brawn, it’s about brains,” Tilly said.

That was a great way to close the show. Poker, at its core, is egalitarian. Anyone can play and, if they can, they should. It’s easy for me to say that. I’ve been in the industry for a decade. I’m not easily intimidated by a grizzled grinder, but some people aren’t like me.

Maria Ho made this point during her keynote speech. It’s easy to view the world through your own lens but, if we want an even playing field, you have to play a few hands from their perspective. If more people can do that, more women may be battling for a place in the Hall of Fame over the next decade.