Jason Koon walks away with a $1.6 million payday and retains the  championship belt as the winner of High Stakes Duel III. 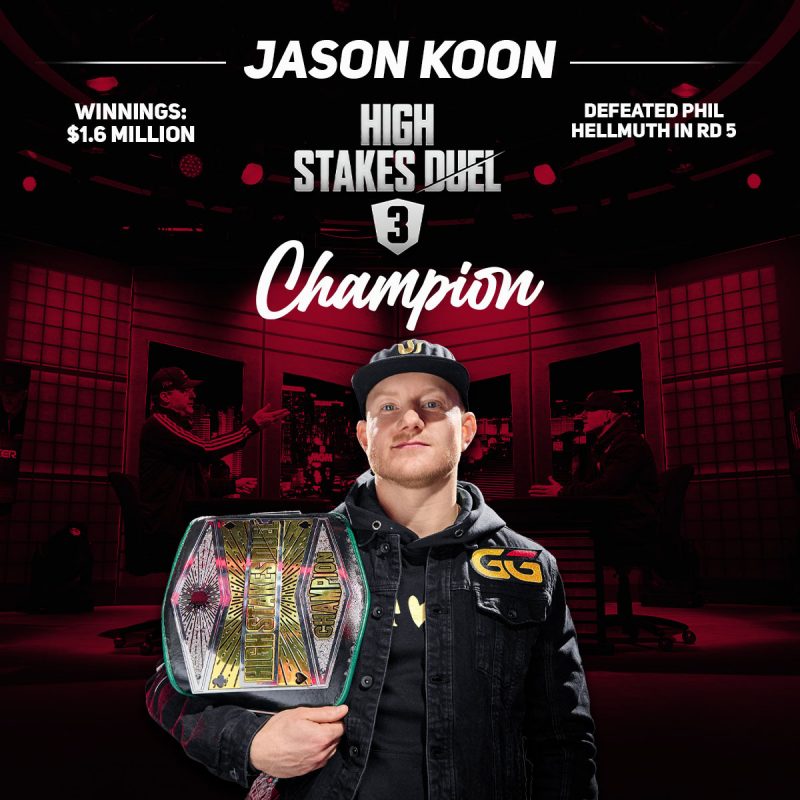 He’s the champ because no one stepped up with $1.6 million to challenge Koon after he took down Phil Hellmuth in the $800K buy-in round on the PokerGO show.

Hellmuth and anyone else with $1.6 million to put up had 30 days to make the challenge. Since no one did, Koon wins the third iteration of the made-for-broadcast contest.

He’s the first player not named Phil Hellmuth to win the High Stakes Duel belt. The “Poker Brat” went undefeated in the first two seasons, taking out Antonio Esfandiari in three rounds on season one, and doing the same to Daniel Negreanu in season two.

More than a year in the making

While the first two seasons of High Stakes Duel took about four months each, season three turned into a 17-month long slog thanks to two cancellations and the 30-day window where the winner has to wait and see if one of their fellow high-rollers will take up the challenge.

Producers and viewers also had to deal with the whims of mercurial poker stars who are often obsessively busy traveling the world playing high-roller events.

Koon made the $800K challenge to enter High Stakes Duel in August after Scott Seiver, Hellmuth’s victim in the $400K buy-in round, dropped out after agreeing to a rematch.

Seiver himself was a replacement for Tom Dwan, who jumped into the contest in the $100K buy-in round after Hellmuth beat racecar announcer Nick Wright in the first round, which cost $50K.

Dwan originally agreed to play Hellmuth for $400K, but bailed. That’s when Seiver came into the picture, only to be dispatched by the all-time World Series of Poker bracelet winner and Hall-of-Famer on May 17, 2022.

Seiver removed himself from the challenge in August 2022, and was replaced by Koon almost immediately. Five months later, on Dec. 7, he beat Hellmuth in a match that cost $800K to play.

Per the rules, Hellmuth would have been allowed to walk away with the $1.6 million if he won without waiting for a challenger. Because this was Koon’s first victory, he had to sweat for 30 days before he could take home Hellmuth’s $800K.

If PokerGO opts for a season four, Koon will start the contest over and face  a player for $50K.

If he wins three matches in a row — like Hellmuth did in the first two seasons — he may cash out for $400K or continue the contest.

After the fourth round, a player only needs to win two in a row to cash without waiting to face a challenger.

Whoever decides to make the challenge will face a poker great. Koon, 37, is a GGPoker pro who has amassed nearly $45 million in tournament cashes in his lifetime.