Winning Poker: 4 Tells That Should Alert You to Fold Quickly
July 26, 2022 Poker Strategy

Winning Poker: 4 Tells That Should Alert You to Fold Quickly

You’re playing $1/2 with a $300 cap. You’ve been playing for about an hour and you’ve built your stack to $800 – the second biggest at the table. You haven’t played many hands and you figure your observant opponents notice that you’re tight. You have no other idea of your image. 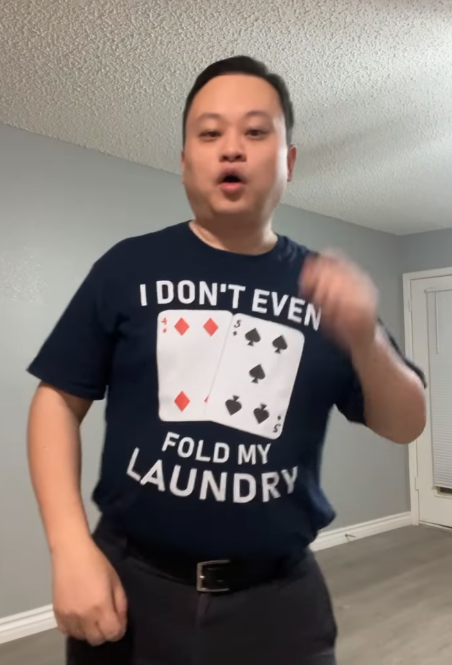 You gotta know when to hold’em, and when to insta-fold’em, right William Hung? (Image: Instagram/WilliamHungOfficial)

Then, you get into a hand where you have to decide if the villain is bluffing.

With the biggest stack on the table, the villain is the only player who has you covered. He’s been in many hands and is pretty aggressive.

He’s sitting opposite you, three to your right in this 8-handed game. He’ll be the big blind in a couple of hands and appears to be getting ready to leave, as he’s racking his chips when the hand begins. One player limps and the villain makes it $25. One calling station to your immediate right calls the $25. You have A♥ J♥. You call. Everyone else folds, leaving the three of you to see the flop with $80 in the pot.

The villain bets $40 and the man in the middle folds. Suspecting a C-bet, and with top pair top kicker, you raise to $100. The villain appears to think for a few seconds before reluctantly calling.

The turn is the 7♠, making a spade flush and a straight possible. This time, the villain bets $200. You think he might be bluffing, just representing the flush or the straight. On the other hand, you have no chance of improving to a better hand if he’s just hit his hand. He’s a loose and tricky player, and he’s seen you’re very tight.

So maybe he’s bluffing. You’re really not sure. What should you do?

Fold as your loose, tricky player is almost certainly not bluffing. This is true even though your typical read of the situation, of the villain’s image, and your image in his mind, make it likely he might be bluffing.

Broadly speaking, there are four things to consider when you’re trying to make the right decision in a tough spot like this.

Is your opponent engaged in a conversation with other players when he bets his $200? Is he talking with the player next to him or someone who’s rail-birding or sweating him? If he is, then it’s likely he’s not bluffing. This is also typically the case when they’re talking to you. Though there are exceptions, most of the time, when your opponent seems very chatty or is otherwise talking directly to you, it means they aren’t bluffing. Bluffers generally shut up, hoping no one will notice that they’re bluffing.

2. Getting ready to leave

When your opponent was dealt his hand, did he announce that he’s leaving? Is he racking up his chips, gathering his clothes, or doing any of the other things a player does when they’re about to cash out? If he was, and he bet strongly on the turn, it’s much more likely that he has a hand than that he’s bluffing.

How about if he’s getting ready to get something to eat? Has another player at the table signaled they’re ready to dine with them? Has someone stopped by, waiting behind them, eager to be joined in a meal or a cup of coffee? If so, there’s a good chance he has the goods this time. This is also true when your opponent is eating at the table.

If food has arrived and your opponent is slicing their meat, shoveling in their chili, or trying to deftly bite on their sandwich without spilling the contents while peeking at their cards and then they bet or raise, expect them to have a legitimate hand.

Some players play games on their phone, laptop, or other device, even while they’re in a hand. If your opponent is so engaged he’s probably not bluffing. Similarly, if they are watching a horse race they’re betting on, filling out some betting slip, or are really old school and are immersed in a crossword puzzle, believe what they’re representing when they bet.

In this instance, the villain was getting ready to leave. You knew this because he started to stack his chips. This is a sign that he was ready to throw his hand away and get out of the game.

For him to bet – not just call along, but initiate the action after you had raised the prior round – generally means he has a strong hand. Playing poker, at that moment is an interruption of their other activity – one that they generally wouldn’t be taking without a good reason.

For the vast majority of players, when someone is otherwise engaged and betting a hand takes them away from that activity, the betting means what it represents. Players seldom over bet, bluff, or bet foolishly when they’re otherwise engaged. That being said, it’s not a dead-lock certainty that they’re not bluffing.

Your opponent could be particularly methodical when they play – no matter what else they’re doing. They could have a well-randomized methodology for their bluffing that they rigorously follow, even when they’re otherwise engaged. They could be going to extraordinary lengths to set you up. But those are rare exceptions to the rule.

For the most part, when you see a player who is otherwise engaged in any of the four activities above, they won’t be bluffing. Fold and save your money. You’ll be adding to your long-term bottom line.