Why You Suck at Poker Part 2: Your Attitude

In my first WYSAP article. I talked about correct opening ranges from under the gun. It was an easy topic.

It’s easy to quantify, simple to learn, and something that any non-expert could understand. My hope was that those non-experts, which by my definition comprises about 98% of poker players, would take that information and learn from it, maybe asking a few questions or asking for more articles on other topics.

“Come on Brad, you knew he had the flush. Stop sucking. You can do this.” (Image: Depositphotos)

But that didn’t happen. Which brings us to a much more important reason for why you probably suck at poker. In fact, if you don’t have this one problem, you probably don’t suck at poker at all. But we almost all have it — an attitude problem.

Now, I’ve been accused of having an attitude problem many times. I think it was written on my report cards in high school a few times. I’ve been offered the occasional knuckle sandwich, which some believe to be a cure for this problem, and even had a few amateur chiropractors attempt to give me an attitude adjustment. But, much like professional chiropractors, their adjustments didn’t really do anything but make me a bit sore. At least the amateurs weren’t billing my insurance.

But, the one place I don’t have a problem with my attitude is when it comes to learning things I’m passionate about. If I meet an expert that I can learn from, I’ll pepper them with questions, buy drinks, offer to buy dinner, and take notes. And most importantly, I don’t try to teach them anything or impress them with the knowledge I already have.

When an expert tells you how not to suck at poker

When you get advice from a real expert, the only reasonable thing to do, if you’re serious about improving your knowledge on the topic, is to ask questions and then shut up and listen to the answers. Just shut up and listen. You can impress someone else with your knowledge later. Try telling your neighbor who knows nothing about poker, or perhaps your dog. They’re easily impressed.

The fact that the response to my article on under the gun ranges was mostly “Cool, let me tell you about unrelated things that I know about poker,” serves as yet another reminder that most people don’t want to learn; they want to appear educated. They don’t want money, they want respect. They want to be seen as a student of the game, but they don’t want to study.

About once a month, for many years now, I get an email from a prospective student claiming that they have an incredible passion for the game and will do anything to learn. They go on and on about how much they love the game and how they will do whatever it takes. Then we schedule a lesson.

During that first lesson, we learn about their goals and their current level of education. Then I usually give them some homework. And you can probably guess how often that homework gets done. After about three lessons, they usually realize that their goal of playing poker for a living isn’t going to be easy. There will be real studying involved. Like, college-level work. And that’s almost always the last time I hear from them.

Other times, I hear from students who I’m pretty sure are going to be successful. They are accountants, bankers, computer programmers; people who already have degrees in something, or people who tell me that they want to learn about the game and they have a specific plan for how to do so. They rarely rant on about how much they love the game. And they usually succeed in getting at least a significant level of poker education and becoming long-term winners.

Let’s illustrate this point with a couple of stories. I love to tell stories, which is why I ask questions, and then shut up and listen when I’m around a great writer or storyteller. 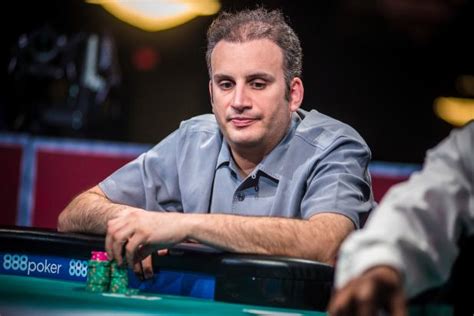 Abe Mosseri is one of the game’s most successful players you probably haven’t heard of. (Image: WSOP)

That boyfriend turned out to be Abe Mosseri, known as EazyPeezy online. He came to chat with her, and she told him that I was a poker coach and he promptly made me an offer. He would sit and play with us and answer any questions I could come up with for an hour. In exchange, I would do the same for his girlfriend for two hours. I accepted his offer instantly.

I didn’t know if Mosseri was a truly great player, but I did know that he was a known player who was playing in a huge game, and I had nothing to lose. I couldn’t imagine spending an hour asking him questions about the game and not learning something. And I was right. I peppered him with questions and we discussed hands, and I learned some very interesting things. I’m sure that conversation was worth thousands of dollars over my poker career.

I hope I was equally as useful to his girlfriend, who was very smart but was fairly new to the game. It was a great investment on Mosseri’s part since he got two hours of coaching for the price of one, but not nearly as good as it was for me.

The important part was that I did nothing to try to impress Mosseri during that hour. I didn’t try to teach him anything or show him how knowledgeable I was. If he told me something I already knew, I just waited for the next bit of advice and took notes. Access to someone playing that big, who knew so much about the game, was priceless to me at that point in my poker career.

That is how a poker student will always behave around an expert. A poker player might try to impress Mosseri, befriend him, or try to at least appear to be on his level. But not me. I was there to soak up knowledge as fast as possible, which is why the one place I don’t have an attitude problem is when I have a chance to learn from an expert.

Contrast this with a few years later when I met a math teacher named Bob in a tournament at Caesar’s. He told me that he was an aspiring pro, and I told him that I was a poker pro who did some coaching. He asked if I would like to have dinner with him on break and I happily accepted.

From the moment the dinner break started, Bob taught me about poker. He had all kinds of theories and a million thoughts on the subject that he wanted to impress me with. He never asked a single question. He regaled me with bad beat stories and tales of the famous players he had met and was sure that he was better than most of them.

Bob didn’t learn a thing during our dinner. He did pay for dinner, so I had a perfectly fine meal at the cost of listening to someone tell me things about poker, many of which were wrong, and it was a wash for me.

Bob didn’t stand a chance. He had the same opportunity that I had with Mosseri — the chance to learn from someone who is much more knowledgeable, and he squandered it. This has happened to me hundreds of times over the years. People learn that I play for a living and immediately start telling me about how they want to be a pro, and then pepper me with bad beat stories and a rousing rendition of my least favorite song “The Story of When I Bluffed Phil Ivey.”

Somehow, the vast majority of people who are drawn to poker are terrible students. Which is great news for those of us who put in the work, because it guarantees a never-ending supply of hopefuls who have no chance of beating us. The truth is, I should be grateful for this tendency among poker players.

So when you see my future articles in this series, think about why you actually suck at poker, rather than trying to convince me, or yourself, that you really don’t suck. If I ever spend an evening with someone as good as Koon, I’ll definitely be soaking up knowledge as fast as I can.

So you just have to ask yourself, “Do I want to be Fox, or do I want to be Bob and just suck at poker forever?” The DMs and emails I got about the article tell me that most of you are going to go with the Bob route and just remain terrible forever. Good luck with that. You’ll need it.

I believe that your comments are spot on. Since I’ve never had the luxury of sitting with a poker pro or a good poker coach, my fall back plan has been to read about 30 poker books written by the pros. Not as good as talking to them, but it sure has improved my game. Love your articles. Keep it up.

Thank you Chris! Always look forward to reading your stuff and I always learn from it. I try to just be a sponge and soak it all in. See ya in a couple months.