Who Deserves Entry into Poker Hall of Fame 2016? Social Media Debate Heats Up

To no one’s surprise, a recently released list of 10 nominees for the 2016 Poker Hall of Fame (PHOF) class from the World Series of Poker stirred up the social media forums. While it will ultimately be up to a select panel of judges and the 25 current inductees to decide the fate of the finalists, that’s not keeping players from speaking their views online. 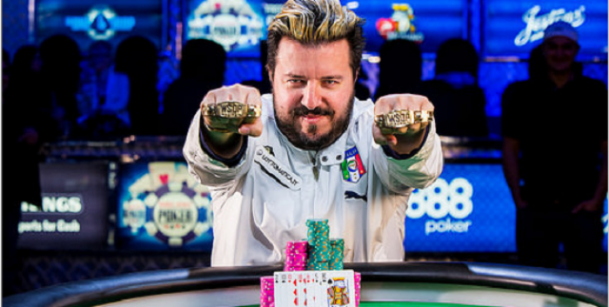 Poker players aren’t just commenting on which of the nominees deserve induction. Some are voicing frustration over certain players being snubbed.

Daniel Negreanu, a recent PHOF member, was among those in the “others were deserving” camp. Kid Poker penned a blog post on the subject, mentioning names such as Huck Seed, John Hennigan, Jeff Lisandro, and David Chiu as among those who weren’t nominated, but deserved to be. He also analyzed the candidacy of each nominated member.

The PHOF selection committee is to judge candidates based on five qualifications. Negreanu gave a 5/5 score to Todd Brunson, Chris Bjorin, Carlos Mortenson, and the recently deceased David “Devilfish” Ulliott.

Being a great ambassador to the game is not one of the qualifications for induction, as Negreanu pointed out. So should Chris Moneymaker, a player considered by many as one of the best poker ambassadors and the man largely responsible for early noughties poker boom, be voted in?

“A guy like Chris Moneymaker, for example, should be judged solely as a player,” Negreanu, who is now famous for having strong opinions on just about everything, wrote. “Which means that any of the great things he has done over the years as an ambassador for the game have no relevance [in this situation]. He is to be judged by the criteria designed for players.”

Negreanu gave Max Pescatori, one of Italy’s most accomplished players of all-time, a 3/5 score, which isn’t quite good enough to receive a vote in Kid Poker’s mind. That led to a somewhat heated argument between the poker pros on Twitter.

“But this year is important especially for someone like you giving me the “not qualifies” with 3/5. What do u think I’m missing?” asked WSOP multiple bracelet winner Pescatori.

“I wrote it that way to avoid specifics,” Negreanu responded, avoiding specifics again.

“I’m not asking for other players. I wanna know what you think I do not qualify on. I’m not getting offended,” Pescatori shot back.

“I appreciate that but I don’t plan on going over what I think people lack specifically. You could argue you are 5/5 for sure,” Kid Poker responded mysteriously.

And Negreanu continued to refuse to explain his score for Pescatori. The two went back and forth on Twitter until Pescatori called him “disrespectful” and “cowardly” for failing to provide details on why the Italian doesn’t deserve a vote.

Doyle Brunson has never been one to shy away from voicing his opinion on controversial topics. He doesn’t appear to be too satisfied with the list of nominees, either, even though his son Todd is among them this year. 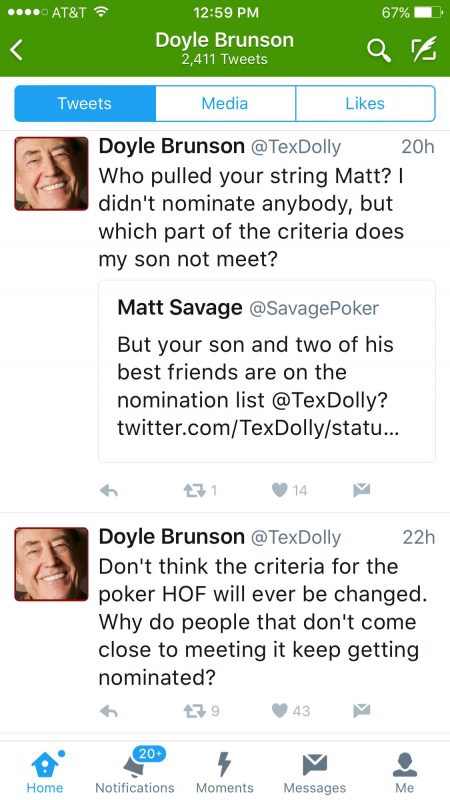 Poker legend Doyle Brunson had plenty to say about PHOF nominees, even with his own son Todd on the roster this year. (Image: Twitter)

“Don’t think the criteria for the poker HOF will ever be changed. Why do people that don’t come close to meeting it keep getting nominated?” Brunson the Senior asked.

“But your son and two of his best friends are on the nomination list,” WPT Tournament Director Matt Savage responded.

“Who pulled your string Matt? I didn’t nominate anybody, but which part of the criteria does my son not meet?” the legend asked.

Savage agreed that Todd is a deserving candidate. But will he join his father in the Poker Hall of Fame this year? That question will be answered next month.