On Day 9 of the PokerStars 2017 World Championship of Online Poker (WCOOP), nine champions were crowned including Patrick Serda, who plays under the moniker “prepstyle71.” The Canadian took down $468,181, the biggest prize of the day, for winning the $10,300 High Roller. 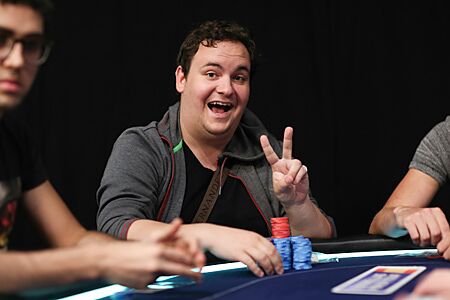 No deal was needed for Canada’s Patrick “prepstyle71” Serda to claim his second WCOOP title on Monday, and also a hefty $469,191 prize. (Image: PokerStars)

When the final table began, Serda held over half the chips in play and never looked back. During heads-up play, Serda approached “KumariOy” about looking at numbers, but the Russian politely turned him down with a simple “no ty” in the chat box.

In what would be the final hand on the tournament, “KumariOy” held kings and nines and shoved the turn, which Serda called with a set of fours. A jack on the river was a blank for “KumariOy,” and he had to settle for second place and a $355,808 consolation prize.

In other WCOOP news, High Roller fourth-place finisher Jens “Fresh_oO_D” Lakemeier, who over the summer won a World Series of Poker bracelet, won WCOOP-23-H ($1,050 NLHE 6-Max) over the weekend for $97,459 after a three-way deal.

It marked the third –COOP related title won by Lakemeier. His previous two came in SCOOP events, including last year’s SCOOP-37-M ($215 Razz) for $20,487.

Lakemeier began heads-up play at a 2-1 chip disadvantage to Argentina’s “xPastorcitox.” But after five minutes, he took the lead. In the final hand of the tournament, “xPastorcitox” held the 8♦7♦ and moved all-in on a 6♥10♦3♦ flop. Lakemeier called with A♥10♥ and his top pair-top kicker held as the 5♣ blanked on the turn followed by the 3♣ on the river.