In Sunday’s action at the 2017 World Series of Poker, Chris Ferguson battled heads-up for several hours while threatening to take over the Player of the Year lead. And Vanessa Selbst had an unforgettable 33rd birthday in the Main Event, though she probably wishes that statement weren’t so accurate. Two players won bracelets, one in a tournament that lasted more than a month, and the other in an event that started to feel that way. 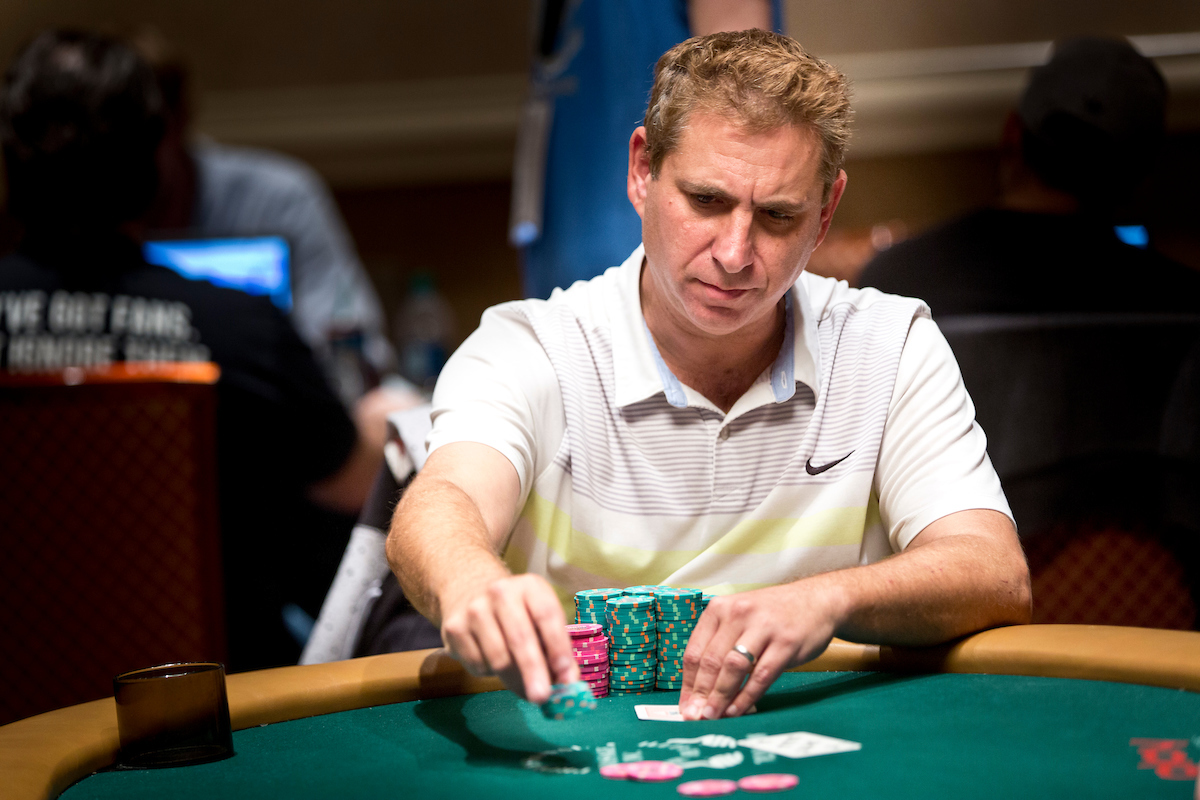 In an up-and-down battle that lasted into the wee hours and could’ve gone either way, journeyman pro Mike Wattel outlasted Chris Ferguson in the $10k Stud Championship, denying Jesus a spot atop the POY leaderboard. (Image: Jamie Thomson / PokerPhotoArchive.com)

Ferguson and Mike Wattel played heads-up in Event #72, $10,000 Seven Card Stud Championship, for what seemed to be about six weeks. (It was actually five hours.)

Both Phoenix-area residents had a rail of mutual friends cheering them on, including poker pro Robert Williamson, who said, “I love them both,” when asked which player he wanted to win.

Wattel led when heads-up play began. He used his aggressiveness to take down pot after pot. At one point, he had his opponent down to just a few big bets and could smell that bracelet.

And then Ferguson, wearing a brown hat and simple black t-shirt that said “love,” made a comeback to flip the script.

Wattel was nearly out before making a comeback of his own. But he eventually regained the chip lead and from there never looked back.

Just after 2 am, Wattel finished Ferguson off to scoop his second career bracelet, and first since 1999. It’s been a long-time coming for the Phoenix pro. He earned $245,541.

Ferguson won $151,700 for 2nd place, but missed out on a golden opportunity to take over the Player of the Year lead. Instead, “Angry” John Monnette is at the top after finishing 5th in the $10k Stud event.

Jesus was attempting to end a 14-year drought without a bracelet. Unless he wins the Main Event or a WSOP Europe tournament, he’ll have to wait at least another year.

Only two non-Americans made the final table in Event #70, $10,000 Ladies No-Limit Hold’em Championship. Both made it to heads-up play.

First, to be clear, this really is a $1,000 event, as all ladies got in for a heavily discounted rate. Men who want to challenge gender norms, however, are legally welcome to, but they don’t get the discount, and can be assured of receiving a lot of scornful side-eye. No takers this year.

In the end it was Heidi May, hailing from Australia, going to battle heads-up with Deborah Worley-Roberts from England. Both were chasing their first career bracelet and a $135,098 top prize.

Pass the sugar to the Aussie for coming out victorious. May had a vocal rail cheering her on. The energy from the crowd helped carry her to this career-defining win.

Day 1B of the Main Event had 2,164 entries, the most for that starting flight since 2011. The Amazon and Brasilia rooms were overflowing with poker players and spectators.

Richard Dudini from Argentina finished the day with the biggest stack (254,500).

Day 1C begins at 11 am PT on Monday. ESPN will not be covering this starting flight. Instead, you can watch it on a 30-minute delay on Poker Central app, PokerGO, beginning at 11:30 am PT.

Cooler of the Century?

There are certain times in poker when you’re destined to lose, and unfortunately for Vanessa Selbst it happened to occur on Day 1B of the Main Event, and also the day she turned 33. Happy Birthday, Vanessa?

The Team PokerStars Pro celebrated on Sunday at the ESPN feature table, and it will be an appearance she never forgets, thanks to one disturbingly memorable hand.

Selbst checked, hoping to get her opponent to bet into her top full house. Baumann obliged, betting 1,700 and Vanessa check-raised to 5,800. The call was made. A meaningless 4♦ came on the river.

Most players would have insta-called in this spot, but Selbst is a skilled professional and took a couple minutes to think it through. In the end, she couldn’t find what could’ve been her biggest fold ever, and instead lost one of the sickest coolers in Main Event history.

Event #19, The Giant $365 No-Limit Hold’em, began in early in the Series with Day One starting flights each Friday throughout June and early July until Day Two began on Sunday. Players could enter multiple flights, and could even cash multiple times, with payouts awarded to the top 15 percent from each starting day.

Las Vegas local Dieter Dechant outlasted this field to win the first-time bracelet while scoring a $291,906 payday. It was the biggest cash of his career, but just barely. Last month, Dechant finished 3rd in the $1,000 Seniors event for $281,691. Those are his only two career WSOP cashes.

After winning the bracelet, he broke down in tears.

“I have dreamt of this moment for 25 years,” Dechant told WSOP post-game officials. “It’s surreal.”

Upon collecting his emotions, he walked to the rail, where he commenced hugging, kissing, and high-fiving friends and family in the crowd. Good game, champ.