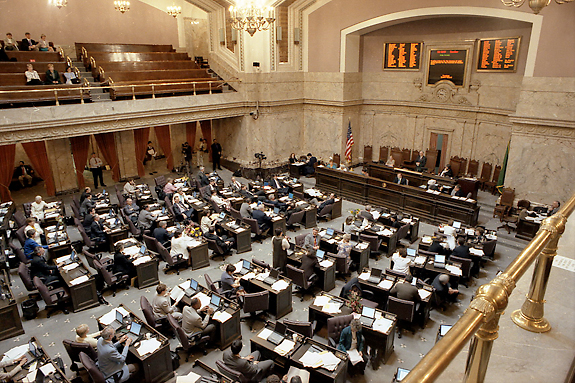 A Washington State online poker bill is unlikely to see the light of day until next year, having failed to gain any traction in the statehouse.  (Image: stateofreform.com)

A Washington State online poker bill has suffered a quick and painless death.

The bill wasn’t forced to sit on life support for months while onlookers nervously awaited the outcome, as has been the case in other states wrestling with the online issue.

House Bill 1114, brought forth by State Representatives Sherry Appleton and Vincent Buys, was proposed last month. If passed, online gambling operators would have been eligible to apply for a license to operate in the state.

But that bill, for the second straight year, died quickly. Washington State lawmakers failed to advance the measure through the state Senate by its Wednesday deadline. Therefore, the bill is finished for the year, and is unlikely to be considered again until 2017.

Last year’s effort to legalize online poker in the Evergreen State took a similar path to failure. The measure was originally introduced on January 12, 2015, and was dead at this same time last year.

Online poker is currently illegal in Washington State. Even during the poker boom era, many poker site operators wouldn’t allow Washingtonians to deposit, for legal reasons.

Next State to Ante Up?

With Washington’s Internet poker bill dead, that begs the question which state will step up to the plate and legalize the game? Many are hoping for California to pass legislation, but there are no indications that will occur any time soon.

Bringing online poker to California would be considered a huge step forward due to the state’s massive population. But, despite the Poker Players Alliance’s valiant efforts, the deck is stacked against it.

But there is hope for Pennsylvania. In fact, many within the poker community are confident the Keystone State will pass legislation sometime this year, perhaps even by summer time.

Pennsylvania’s population is dwarfed by that of California, but is far greater than Delaware’s, a nearby state which already has a poker bill in force. The other states with legal online poker sites are Nevada and New Jersey, of course.

A New York online poker bill recently advanced through its first stage, a positive first step. There is hope for a bill to pass in the near future in the Empire State, but there is no timetable on when that will happen.

Poker Often Lumped in with Gambling

Sheldon Adelson’s RAWA bill is an attempt to prevent any state from legalizing online poker. The bill, which has been largely unembraced by Congress, is designed to group poker with other forms of online gambling, such as slot machines and roulette.

If Adelson were to have his way, states such as Washington wouldn’t even be able to bring forth an online poker bill, as he does not support a poker carve-out.

As it stands, individual states are given the opportunity to make decisions regarding online poker. But, thus far, only a small percentage of the 50 states appear to be seriously considering such legislation.

Wow, that really sucks. I’m sorry for all you Americans. I really hope that this all gets sorted out soon.

My niece lives in that state and this was all but painless for her. She wanted so badly to be able to play online, when she heard she couldn’t…she threw a temper tantrum on facebook, lol.