The Washington Post dropped a bombshell Thursday about the apparent lengths GOP megadonor Sheldon Adelson will go to when protecting his interests, suggesting that he  played a significant role in the Department of Justice’s recent reversal of a 2011 position on the Wire Act. 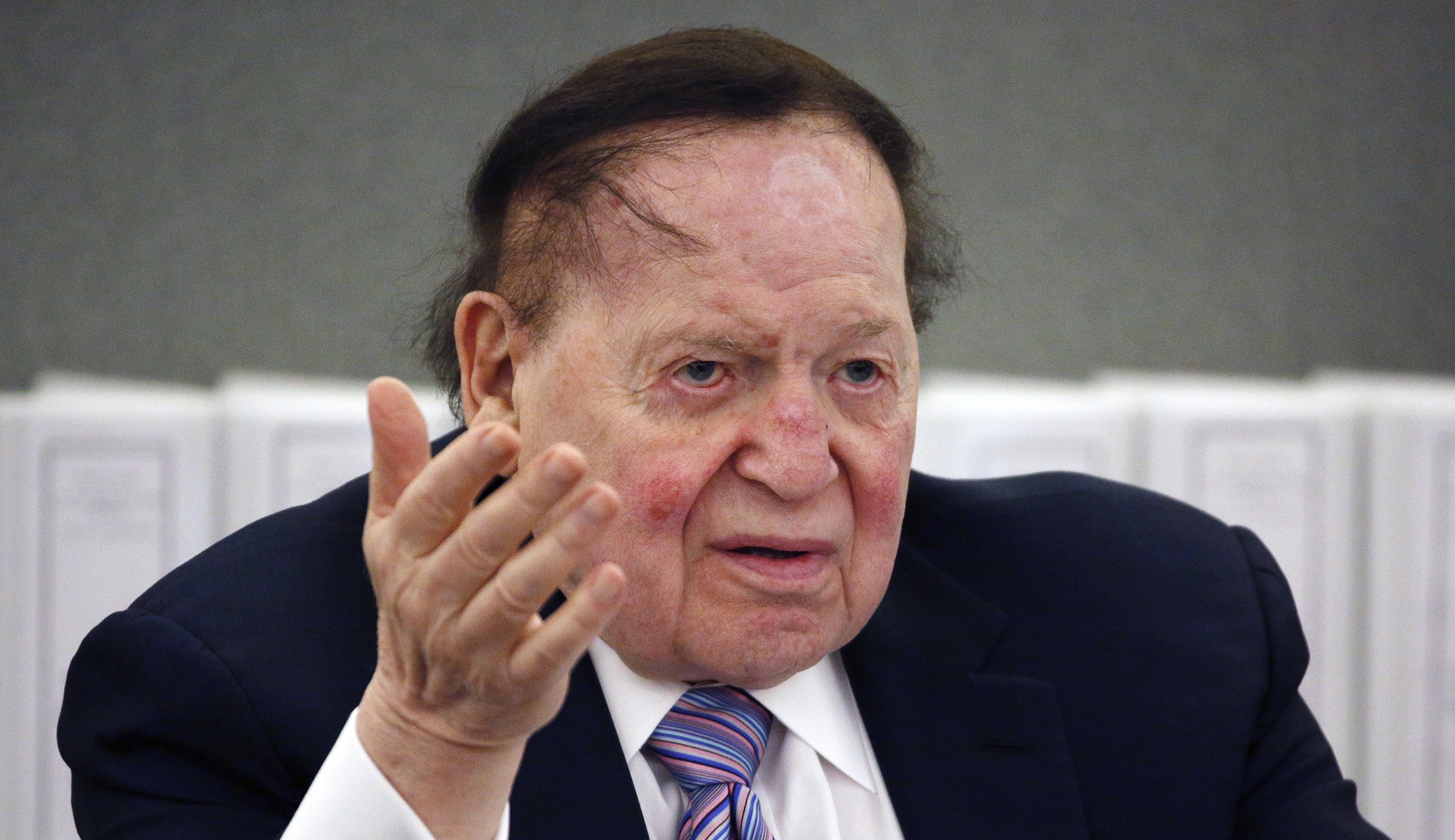 The DOJ did an about-face on online gambling, and Sheldon Adelson, one of Donald Trump’s biggest supporters, who doesn’t want you to play poker online because it could make him less filthy rich, couldn’t be happier. (Image: Washington Post).

Adelson, whose company Las Vegas Sands owns the Venetian and Palazzo is worth an estimated $35.6 billion, according to Forbes. That’s nearly triple the reported net worth of President Donald Trump and fellow casino billionaire and ousted RNC Finance Chair Steve Wynn.

But that isn’t enough money to satisfy Adelson’s cravings, apparently. The LVS founder wants to ensure the dough keeps rolling in. And to accomplish that goal, he is continuing his fight to prevent poker players from leaving the casino to play cards from the comfort of their own homes or mobile phones.

At 85, not-so-young Sheldon is showing no signs of letting up in his quest to ban internet gambling nationwide. And while his Restoration of America’s Wire Act (RAWA) legislation has fizzled in Congress year after year, it appears he may have opened his checkbook to get a favorable outcome from the Justice Department, according to the Pulitzer Prize-winning Washington Post.

Last month, the DOJ revealed a change to the Department’s position on the 1961 Wire Act, essentially throwing out a 2011 opinion that determined the law, which prohibits electronic transmission of gambling information across state lines, applied only to sports betting. The new opinion, however, contends the Wire Act applies to all forms of online gambling and betting — essentially what Adelson has been lobbying for with RAWA, and a position that upon being enforceable by the courts, could prevent shared online poker player pools across state lines.

In an interview with the Washington Post, Charles Cooper, an attorney who worked for an Adelson-backed lobbying team, admitted the Justice Department’s Office of Legal Counsel echoed virtually identical anti-online gambling arguments as those provided by his law firm in a written memo.

The DOJ’s new opinion “accords entirely with the analysis my firm undertook and I shared with the DOJ,” Cooper told the Post.

The Justice Department denied being influenced by outside lobbyists. But that claim isn’t going over well with some politicians.

“We can see no good reason for the Justice Department’s sudden reversal,” the two AGs in states with legal online gambling wrote in their letter.

They also disputed the DOJ’s claim that lobbyists didn’t influence the opinion. The letter expressed concerns by reports of “substantial lobbying by outside groups.”

Chris Moneymaker and Daniel Negreanu were among those on Poker Twitter who piled on Adelson following the Washington Post report.

If you wonder why we can’t play online poker in the USA. This guy is one of the main culprits. All to protect his interests. https://t.co/Z7mUWFKqGp

Daniel Negreanu, never one to sugarcoat his opinions, affectionately referred to the casino owner as a “sh*thead.”

Few on Twitter disagreed. Some even suggested poker players boycott Sands casino properties (as they have been doing for years).

The issue of Adelson’s influence came up as Whitaker, the former Iowa Hawkeye tight end, spoke in front of a House Judiciary Committee on Friday.

Rep. Jamie Raskin (D-Maryland) asked Whitaker about his involvement with anti-online-gambling groups and casino interests, and pressed Whitaker about his participation in the November Wire Act opinion reversal (which was released in January). The Iowa native said he wasn’t involved and in fact was recused from the matter at the time due to previous work for Adelson affiliated companies.

“Your inference that somehow that process was corrupted or corrupt is absolutely wrong and the premise of your question I reject,” he told Raskin.

Raskin, however, wasn’t buying what the AG was selling. He told Whitaker “further investigation” into the potential corruption must take place.

Over the past two years, Adelson donated over $200 million to Republican politicians. His family also shipped $500,000 to a legal defense team that represents Trump against his alleged crimes.

His wife, Miriam, received the Presidential Medal of Freedom last year. It is the highest civilian award in the United States. Earlier this week, many journalists accused Trump of giving her the prestigious award for donating to his defense. Fact-checking site Snopes investigated the claims and rated the accusations as “unproven.”

Adelson, because of his deep pockets, has influence within the GOP. He uses that power to get Republican politicians on his side. Take Senator Lindsey Graham (R-South Carolina), for example.

In 2014, as a favor to his donor, Graham introduced a bill to ban internet gambling. That piece of legislation, to the poker community’s delight, failed about as miserably as Lindsey’s 2016 presidential campaign. On Friday, he unsurprisingly backed the DOJ’s recent Wire Act opinion reversal.

Adelson says he doesn’t oppose online gambling because of his own interests. Instead, he claims he fears young and “economically vulnerable” people could “fall prey to the lure of online gambling.”

For the record, it’s free to enter Adelson’s casinos. Even the “economically vulnerable” can pump money into slot machines at his properties. This concept isn’t exclusive to online gambling.

Hopefully when this man has met his maker things will start to improve with online poker. SO much greed in his actions.

Isn’t funny how it’s one specific group of people who control so much of the wealth, and we’re somehow also responsible for protecting that same group in foreign lands. They are truly a wicked bunch.