Viktor Blom has done it again.

The €5,300 buy-in partypoker LIVE MILLIONS Germany Main Event, which attracted 1,022 entries to King’s Casino Rozvadoz, offered a €5 million guaranteed prize pool. After four days of intense play, it was online legend “Isildur1,” aka Viktor Blom, who walked away with a €850,000 ($1,048,153) first-place prize.

Viktor “Isildur1” Blom notched the second-largest score of his career by taking down the partypoker LIVE MILLONS Germany ME. That allowed him to move into eighth place on Sweden’s all-time poker money list. (Image: partypoker).

In the partypoker LIVE MILLIONS Germany Main Event, Blom made it to heads-up play against Moldova’s Pavel Plesuv, and it proved to be an epic battle. At one point, Plesuv held a nine-to-one chip lead, but the Swede used his years of experience to claw back. The two eventually struck a deal in which they both locked up €750,000 ($924,841) and left €100K and the trophy to play for.

Plesuv called with the Q♦7♦ and the flop came down Q♥9♥K♦. Plesuv check-called a bet of 45 million and then check-called one of 105 million on the A♦ turn. When the 5♥ completed the board on the river, Plesuv moved all in and Blom picked him off with a pair of kings.

Blom now has $2,787,194 in live lifetime earnings which vaults him into eighth place on Sweden’s all-time poker money list.

Another player to make a deep run in Main Event was Brazil’s Joao Simao, the last partypoker ambassador in the field. The Brazilian made it all the way to four-handed play, which is when he ran into the Blom buzzsaw. 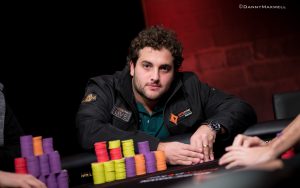 It was actually Simao’s fourth cash of the series, after finishing runner-up to Patrik Antonius in the €25K High Roller for $307,772 and placing fourth in the other €25K High Roller for $134,746. Toss in a small cash in the Warm-Up, and the Brazilian earned $795,753 during the partypoker LIVE MILLIONS Germany, which moved him up to fifth on Brazil’s all-time money list.

The partypoker LIVE MILLIONS will head to Barcelona in April for its Grand Final, which will offer up €23 million ($28.5 million) in guaranteed prize pools.

definitely this isildur is a mostro in poker, in my opinion is a player who has no limit to play and more in your bets cash tables, hopefully that million won it lasts longer hahaha because surely in a cash table what leave or bend them ..

I was watching the online translation of his event on Twitch a few hours,expessially heads-up.That was very tough and cool final battle,I cant even imagine the skill of high level poker of such players as Blom.He won the huge field more than thouthand people live.They are really space people!!!