Touring the Vegas Strip and Downtown Like a Tourist (VIDEO)

Things change fast on the Vegas Strip. Once popular tourist attractions like the lion habitat at MGM Grand and the pirate battle in front of Treasure Island are no more. But there is still plenty to see and do for free on Las Vegas Boulevard and Fremont Street. 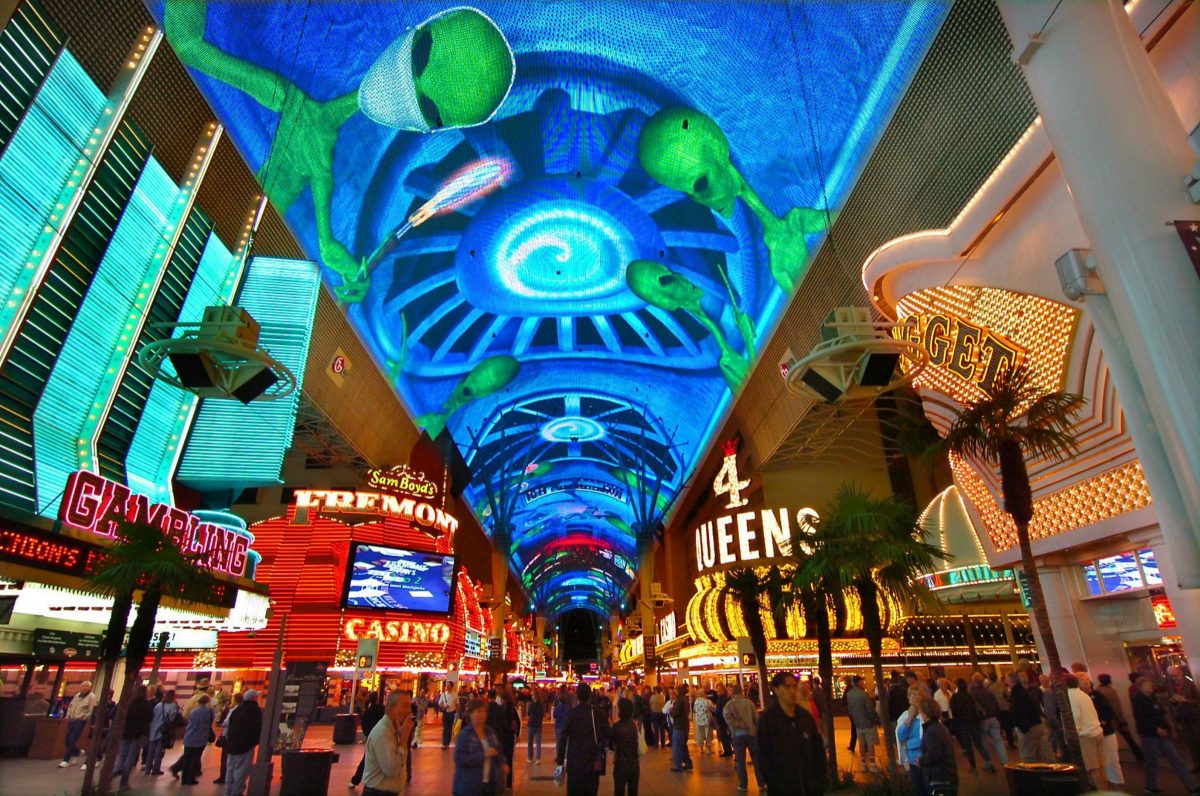 The Fremont Street Experience comes alive at night, and the canopy recently got a $32 million upgrade. (Image: vegasexperience.com)

Sometimes we forget when playing poker that there’s an adult playground all around us in this town. And not all of it has to cost you a WSOP buy-in or require bottle service to have a good time.

Here are some of my favorite things to do as a family man in Sin City:

You still can’t beat just wandering through each casino, checking out the architecture and seeing what each has to offer. As I write this, I picture the blown-glass Dale Chihuly sculpture in the Bellagio lobby (and the nearby conservatory), the “streets” of Paris, and the ceiling artwork of the Venetian.

Some may dismiss Vegas for what they consider cheesiness, but I think the city does its theme play well. Plus, walking through the casinos beats hot-footing it along the Strip in the triple-digit summer temperatures.

Attractions on the Strip include a mix of the old and new. Bellagio’s fountains are now two decades old, but they still entertain. Perhaps the best of the free attractions, more than a thousand separate fountains shoot water more than 20 stories high in the lake in front of Bellagio. The fountains put on a show every half hour during the day and every 15 minutes after dark until midnight, and “dance” to music ranging from classical to pop, with new songs added in recent years. It may be just a water show, but it doesn’t disappoint.

About a 10 minute walk north of the Bellagio is the Mirage volcano, which “erupts” after dark at 8 pm, 9 pm and 10 pm. The 54-foot high structure in front of the Mirage emits a show of light, steam, drumbeats and water to approximate a volcano eruption.

High Rolling on the Linq

The Linq is the pathway running between the Flamingo and the Linq hotel, connecting Las Vegas Boulevard and the High Roller observation wheel. This pedestrian “street” is a surprising quick escape from the Strip, dotted with bars, shops, restaurants, and even a bowling alley.

Opening five years ago, at 550 feet tall, the High Roller is the tallest Ferris wheel in the world. You can buy your ticket in one of the pods for a 30-minute revolution. Ticket prices range between $9 and $50 depending on when you go, and there’s even an option for a booze cruise of sorts with unlimited drinks. 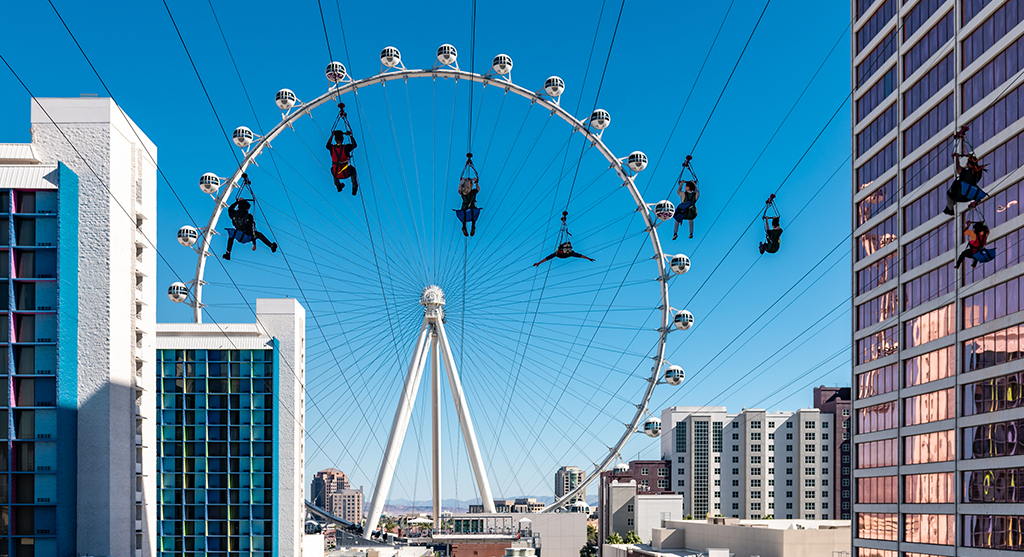 One of the other new features of the Linq is the Fly Linq zip line, which allows you to soar 12 stories over the Linq promenade — Superman style if that’s your preference.  Fly Linq is the only zipline experience on the Strip, and allows up to 10 people to “fly” together simultaneously.

Of course zipline aficionados shouldn’t forget the Rio. Their Voodoo zipline offers a rather unique way for poker players at the WSOP to catch a breath of fresh air. The ride starts 500 feet up at the top of the Masquerade tower and connects to the roof of the shorter Empanada tower. But from there the ride is only halfway over, as you’re whisked backwards back up to the top for a second look at The Strip and mountains all around you.

One more nearby zipline if you just haven’t had enough — Slotzilla, downtown on Fremont Street. Riders start at the top of a giant slot machine, and have two options for taking either a short path, or a higher, longer path along the top of the famous Fremont Street Experience. Speeds reach up to 40mph on this zipper, which may be fun for the patrons but really hurt the aesthetics of the area, in my opinion.

Still, regardless of whether or not you decide to ride Slotzilla, casino hopping on Fremont Street is both easier than what you can do on the Strip — and it’s much friendlier on your gambling budget, too.

Downtown, you can hit about 10 casinos within four blocks and those casinos offer both lower limits and better odds for the player. It’s not hard to find blackjack paying 3-to-2, Jacks or Better video poker machines paying nine credits for a full house and six credits for a flush, and craps games with higher pass-line odds. (Up to 100x at Binion’s.)

Fremont Street is where Las Vegas as we know it today all began. And the addition of a pedestrian plaza and shaded canopy in the mid-1990s made downtown tourist friendly once again.

This four-block section of downtown is admittedly uneventful during the day, but really comes alive at night, thanks to all sorts of colorful characters on the ground, and the world’s largest single screen projection overhead. The Experience is an extravaganza of sound and light with various themes shown on the canopy hourly after dark, and it just got a $32 million renovation that debuted this past New Year’s.

Projecting 550,000 watts of HD-quality imagery (from 12.5 million LED bulbs) and concert-quality sound, the new 1,500-by-90-foot Viva Vision screen puts on shows every hour. These six-minute music video “experiences” are produced by known artists and DJs, including The Killers, The Chainsmokers, Green Day, Imagine Dragons, The Who, and Tiesto.

Superstar producer Steve Aoki will be on hand Thursday, June 13, to put on a free show, in which he will debut his new Viva Vision set, which will be added to the lineup of shows that play downtown above Fremont street every night.

Johnny Kampis is an Alabama-based journalist and longtime Vegas visitor. He is the author of Essential Guide to Vegas during the World Series of Poker and Vegas or Bust: A Family Man Takes on the Poker Pros. Follow him on Twitter @TuscaloosaJohn.

over theyears there has been a fascination with vegas, have heard so much and i will soon do the vegas tour, not this year but for sure hoping next one and gather i the shows and some card ggames