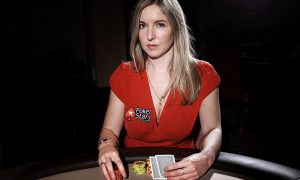 Victoria Coren Mitchell has announced that she has ended her relationship with PokerStars, citing the announcement on Friday that the company would be including casino games alongside their poker offerings as the reasoning behind her decision. Coren had been a member of the PokerStars Team Pro roster since 2007, and was one of the major faces of the brand in the United Kingdom.

“On Friday night, PokerStars.com announced that it will be rolling out online casino gaming alongside its internet poker,” Coren wrote on her blog. “As a result, on Saturday morning, I terminated my endorsement contract with them.”

Coren: “The Right Thing is to Walk Away”

Coren wrote that she made a quick decision because she knew she had to act quickly on something she felt strongly about. She noted that the loss of the endorsement money will be difficult, and that she had actually been planning to play more online poker going forward, but that she had to leave before she could talk herself out of doing what she felt was right.

“I can’t hang around, sleep on it, have meetings and talk myself into staying, when my gut tells me that the right thing is to walk away,” she wrote. “This is no criticism of PokerStars itself: business is business, they are providing a new service that people want, and I know they intend to abide by some key principles of responsible gaming.”

Coren said that while she even occasionally plays table games at casinos, she couldn’t allow her name to be used to endorse games other than poker even if it was only in a very passive role while she worked on the poker side of the PokerStars business.

Didn’t Want Her Name to Send Players to Casino Games

“Poker is the game I love, poker is what I signed up to promote,” Coren wrote. “The question I’m probably asked most often in interviews is about the danger of addiction, going skint and so on. I’m always careful to explain the difference between the essentially fair nature of poker, where we all take each other on with the same basic chance, and those casino games at unfavourable odds which can be (especially online) so dangerous for the vulnerable or desperate.”

While Coren said that knowing there was a risk that her name could send people to addictive games was “not the way I want to make a living,” she did leave open the possibility of working with the company again in the future.

“I will watch from the outside to see what the new site looks like, how safe and responsible it seems, how the advertising feels and the direction the company takes,” Coren wrote. “Maybe in the future I will be able to work with PokerStars again on something which is pure poker.”

Coren is a popular media personality in the UK, holing the television quiz show Only Connect and the radio comedy series Heresy. She also writes a variety of columns for publications including GQ and Elle. But Coren also became a real force in the world of poker; earlier this year, she became the first player ever to win two European Poker Tour main events, having won London 2006 and San Remo 2014. And despite her exit from PokerStars, Coren says she’s not leaving the game she loves.

“Players and gamblers of the world: I’m sure I’ll still see you all across the occasional baize table,” she wrote.

Much respect to Vicky for taking this decision!

Bravo for sticking to principles instead of opting for the cash !!