The final opening flight of Venom V attracted almost 1,600 players on Sunday and, although that was just short of expectations, Americas Cardroom will still award more money than it ever has before. 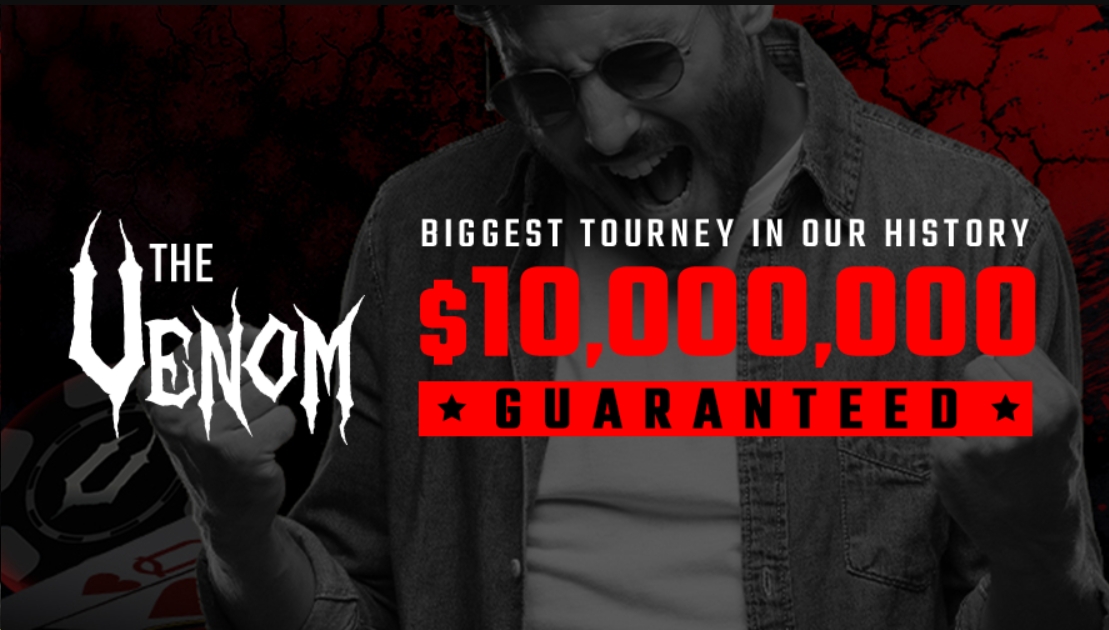 Poker pros and casuals alike anted up in droves to make this summer’s Venom MTT the biggest ever. (Image: Americas Cardroom)

The fifth installment of Venom didn’t surpass its $10 million guarantee, but with 3,930 entries collected, the ongoing event is still bigger than all previous versions of the tournament, including January’s Venom IV, which attracted 3,774 players, creating a $9.4 million prize pool that beat its $8 million guarantee.

Buoyed by that success, Americas Cardroom CEO Phil Nagy raised the bar by $2 million this time around.

Fortunately for Nagy and Americas Cardroom, the situation improved on Day 1B. With play occurring on a Sunday, July 25, players were out in force and the field topped 1,026 entries.

That’s a wrap…for Day 1.Our final $10 Million Venom flight is over with 288 players moving on to Day 2 tomorrow (Monday, August 2nd). They’ll be joined by the 357 players who survived Day 1A, 1B, and 1C. Needless to say, tomorrow will be wild.🕷️#Venom2021 #VenomTournament #ACR pic.twitter.com/gZqfnnSJLM

That momentum petered out slightly on Day 1C when just 771 players took to the virtual felt. With some ground to make up, everything came down to yesterday’s final starting flight. 1,598 players anted up for their final shot at Venom glory, taking the total number of entries to 3,930, which was just 70 players short of the break-even mark.

In other words, Americas Cardroom has a $175,000 overlay to cover. That’s not ideal but, in the grand scheme of things, it’s far from a disaster.

Another record for Americas Cardroom

Venom V is bigger than Venom IV, which took place in January 2021. More significantly, it beat Venom III which took place in July and August last year. That event attracted 3,872 entrants and become the biggest ever online MTT by a US-facing poker site. TRT-Vitor won the title and $1.3 million to cap off a successful third event at a time when COVID-19 restrictions were rife.

Although COVID restrictions haven’t gone away completely, they’re less prominent today than they were in 2020. As such, people have the option to do more things outside of poker now than they did last year, which could have contributed to the dip in interest. Even so, Venom V still outperformed its predecessors by a healthy margin.

Couldn’t imagine a better experience. Thank you so much for the opportunity. It’s certainly a day I’ll never ever forget. https://t.co/utFAmXO8K4

By this measure alone, Venom V can be classed as a major online MTT. And, even though Americas Cardroom operates in a different space than do regulated US poker sites, it’s clearly established itself as a growing force in the tournament space.

Day 2 of Venom gets underway today. There are 645 players remaining, 576 of whom will win some cash. Following the conclusion of Day 2, the event will continue until Aug. 4 when two players will bank more than $1 million each, and one person will become Venom V champion.