Professional poker players like Daniel Negreanu fell in love with the Vegas Golden Knights last year during their Cinderella run to the Stanley Cup Final. Now, the expansion hockey team is looking to further their relationship with the gambling community by entering into a new partnership with bookmaker William Hill. 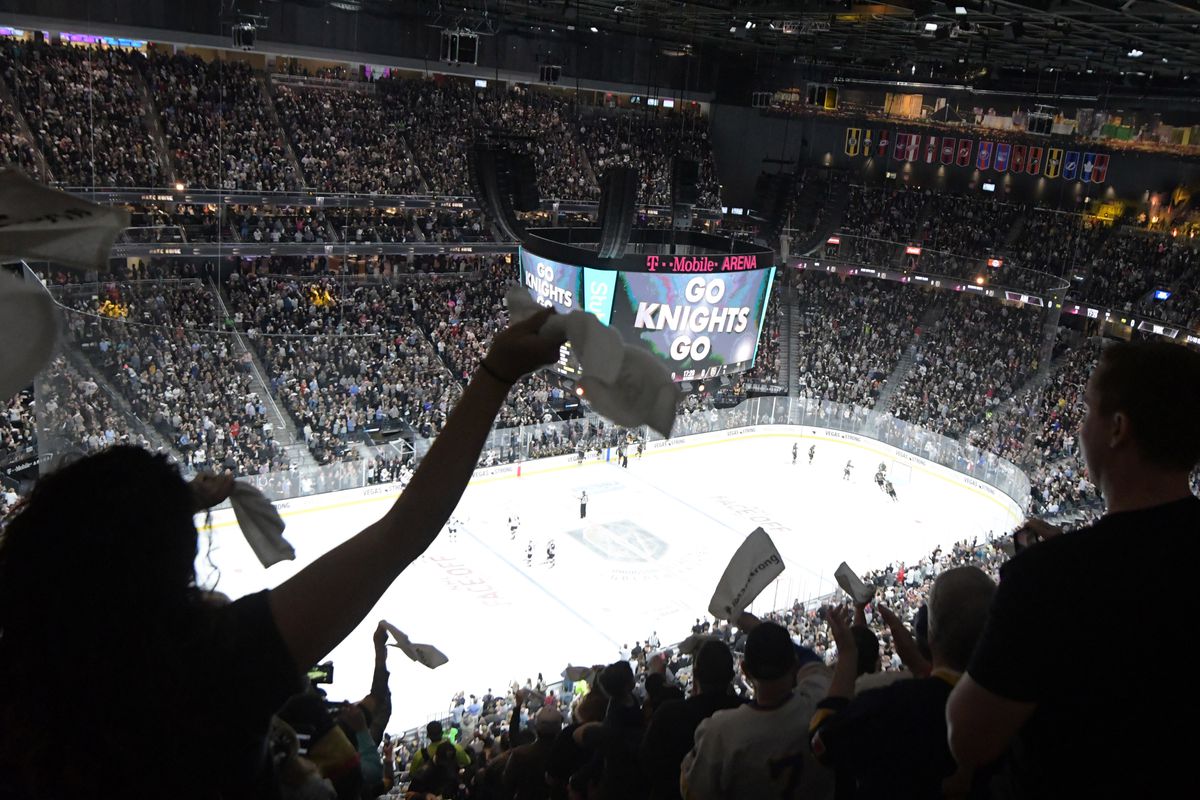 Fans at Vegas Golden Knights games will see plenty of William Hill signage at T-Mobile Arena now that the sportsbook has entered into a partnership with the NHL franchise. (Image: Kirby Lee/USA Today Sports)

The Golden Knights and William Hill US announced a partnership on Tuesday, the first of its kind for an NHL team. The deal makes William Hill US an official partner of the NHL franchise, meaning that fans will be seeing a lot more of the sportsbook’s branding inside T-Mobile Arena in coming seasons.

According to a press release, the two sides have agreed to a multi-year partnership that will see league-wide odds appear on the “Knight Tron” during intermissions, the introduction of the “William Hill Line Change” as a sponsorship plug when the Golden Knights make line changes, away game watch parties for fans and bettors, and plenty of in-game signage promoting the sports book.

“We are always looking for innovative ways to engage different segments of our fan base and provide a unique fan experience,” Vegas Golden Knights president Kerry Bubolz said in a statement. “This partnership between a major professional team and a sportsbook operator is a historic, landmark agreement and we are delighted to be leading the way with William Hill in this space.”

The Golden Knights shocked the hockey world last year, finishing first in the Pacific Division and winning the Western Conference before falling to the Washington Capitals in the Stanley Cup Final. It was an incredibly unlikely run for a first-year expansion team, with some sportsbooks offering odds as high as 500/1 on Vegas to win the Stanley Cup before the season began.

Locals and visitors were already betting heavily on the Golden Knights last season, and with mobile wagering already available in Nevada, there were certainly plenty of fans who were placing bets while watching games at T-Mobile Arena. But the team couldn’t do much to acknowledge that reality last year, a situation that will change for the 2018-19 season.

“We have a really unique marketplace because of all the gaming companies located here, so from day one this category has been one of our key targets,” Bubolz told Sports Business Daily. “Even though we couldn’t promote the sportsbook component with our gaming partners, we were fortunate to be able to develop significant relationships that…helped us learn how they view the space and what’s important to them.”

William Hill will directly benefit by having its brand name in the arena, as fans looking to place a bet are likely to gravitate to their offerings – especially if they are new to sports betting. But beyond that, being the first bookmaker to partner with a major American sports franchise could help them get their name out to other teams and sports fans across the nation.

That could prove critical for the company as sports betting becomes legalized in more states across the USA. William Hill has been aggressive in pursuing opportunities in the United States, as the company is expecting a hit to its UK revenues when the maximum stake on fixed-odds betting terminals is cut to just £2 ($2.63) in the near future.

Very good for William Hill; since partnering with Vegas Golden Knights is very beneficial for them.
The question is:
How will the results be handled?
I do not understand why they associate with depository teams, I understand that they can sponsor them but I do not understand society.
That is what I understood in this news.