The Vegas Golden Knights are now just one step away from one of the most improbable championships in the history of major professional sports after defeating the Winnipeg Jets 2-1 on Sunday to clinch victory in the Western Conference finals. 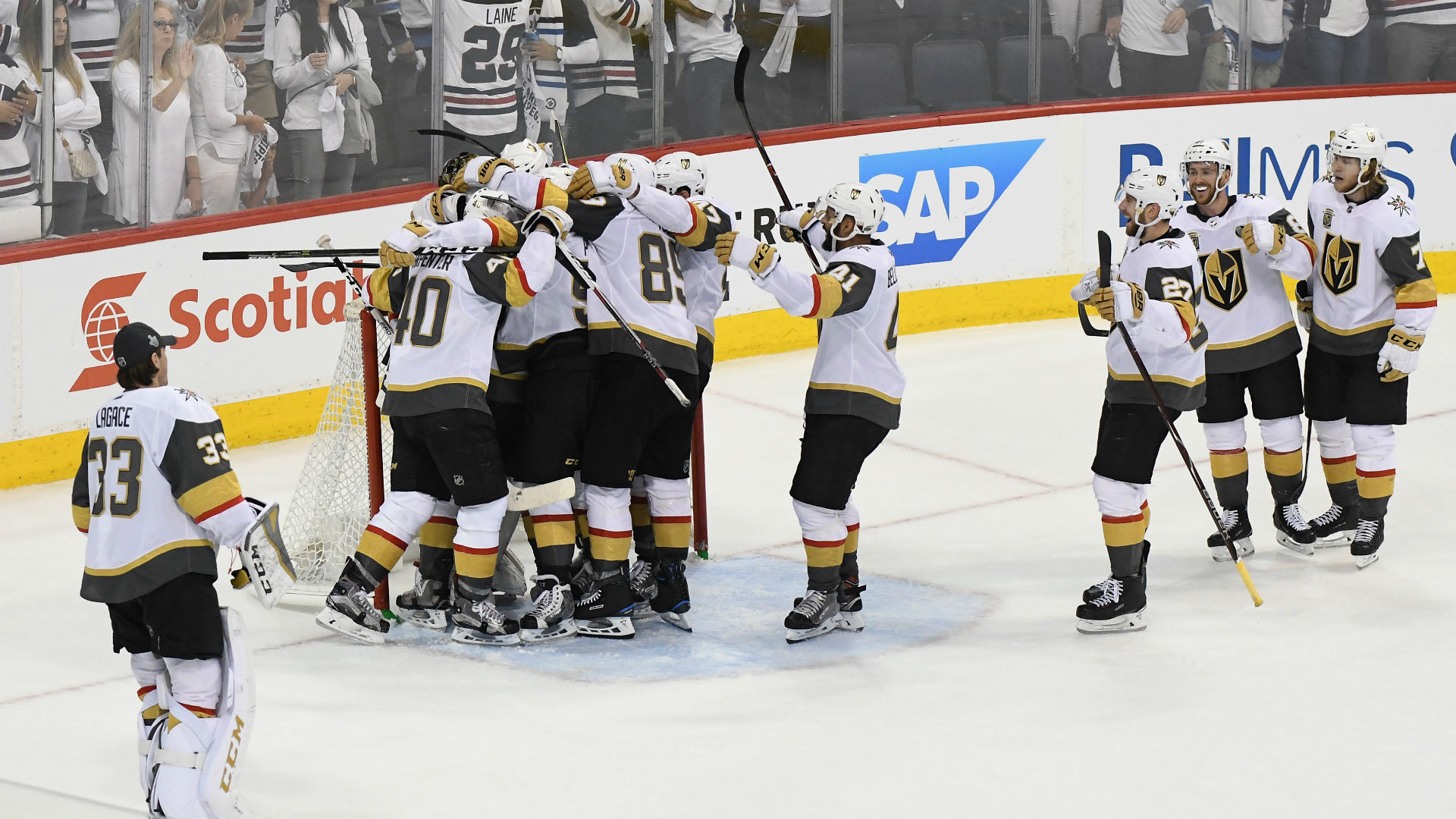 The Vegas Golden Knights celebrate after defeating the Winnipeg Jets 2-1 in Game 5 of the Western Conference finals. Vegas will now advance to the Stanley Cup Final. (Image: Getty)

The Golden Knights took just five games to dispatch Winnipeg, putting Vegas in the Stanley Cup Final in the first year of the franchise’s existence. The team has gone 12-3 in the playoffs, and won four straight games in the conference final after losing Game 1 in Winnipeg.

As has been the case for much of their run, Vegas relied heavily on the goaltending of Marc-Andre Fleury to carry them to the conference title. In the clinching game, Fleury made 31 saves in the Game 5 victory, and posted a .938 save percentage for the series as a whole.

“They had the best goalie in the league right now,” Winnipeg center Mark Scheifele told reporters after the game. “He stood on his head. He made a lot of big saves.”

Fleury could be the leading candidate to win the Conn Smythe Trophy, the award given to the NHL’s playoff MVP. That would be a first for the 33-year-old goaltender, who has already won the Stanley Cup three times with the Pittsburgh Penguins.

“You could argue that he is playing the best hockey of his career, which is saying a lot,” Vegas forward Erik Haula told reporters after Game 5. “He’s everything you want in a goalie and it’s just a privilege playing with him.”

Fleury wasn’t the only hero on Sunday, however. Ryan Reaves broke a 1-1 tie in the second period after tipping in a shot from Luca Sbisa, giving Vegas their winning goal. It was the first goal Reaves has scored in the playoffs this year, and his first since being traded to the Golden Knights from Pittsburgh in February.

“The guys that weren’t playing, myself included, we stayed ready,” said Reaves. “We had fun while we were doing it, but we worked hard so when we were called upon we were ready to go.”

Vegas Sportsbooks on the Hook for Big Bets

The unlikely success of the Golden Knights has taken the team from being a 500/1 underdog to win the Stanley Cup before the season began to now becoming an even money favorite to walk away with a championship. But those initial long odds still matter a lot in Las Vegas, where there are plenty of outstanding bets placed on the team to go all the way before their first season had even begun.

According to a tweet from ESPN’s Doug Kezirian, the Westgate Las Vegas SuperBook has an outstanding $400 bet at 300/1 odds that could pay out $120,000 to one lucky fan should the Golden Knights go all the way.

Westgate spokesman Jay Kornegay told USA Today that the book also accepted 13 wagers at 500/1 odds, though they were relatively small, with the largest being for just $60. That ticket would pay out $30,000 should the Las Vegas home team win the Stanley Cup.

For now, Vegas is waiting to see who they will face in the Stanley Cup Finals. In the Eastern Conference, the Tampa Bay Lightning currently lead the Washington Capitals 3-2, with Game 6 of their series scheduled for Monday night in Washington.

They didn´t fly pass the Jets. It was very close games ! Their goalkeeper was the best player of their team !

I’ve never been a hockey fan personally, but I can say I have jumped on the Knights Bandwagon for this one. Would be awesome to see them make the first year team wins a title list.