No, guys and gals, that headline doesn’t read Vanessa Rousso is newly single. Sorry to be the bearer of bad news. The former PokerStars Team Pro is set to release a new single, “Kiss Face,” on February 5. 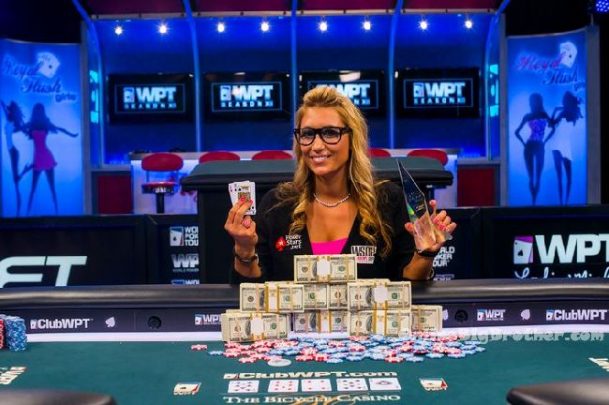 Now a DJ/musician, along with her girlfriend Melissa Ouellet, Rousso creates dance music and has plans to drop a series of singles this year. The duo, dubbed “N1TEL1TE,” began working on Kiss Face last year.

“’Kiss Face’ is the first in a series of dance genre singles we will release this year,” she told Poker Central. “’Kiss Face’ itself is a project that we started in early 2016 and originally intended for it to be used as the instrumental backdrop of a Future House remix we were going to produce for Adele’s hit song ‘Hello’. However, after demoing the beat we had produced to some of our close friends and music-industry insiders, we felt that this piece deserved to stand on its own as an original production.”

On the group’s website, fans of the couple can purchase N1TEL1TE clothing, hats, and a “Skype Digital Dinner.” That’s right, for $350, you can eat dinner and chat with Mel and Vanessa virtually, over Skype.

Moving on From Poker

Rousso was a popular figure during the poker boom era earlier this century. She appeared on numerous poker television shows and was part of Team PokerStars.

But those days are over, at least for now. She told Poker Central taking other people’s money to earn a living was bad for her soul. With music, she can “bring positivity to others.”

Before the music gig, Vanessa was a HouseGuest on the hit reality TV show Big Brother (Season 17). She used strategic maneuvering and manipulation to have success.

At a 2006 WPT final table, Rousso met fellow poker pro Chad Brown. The couple fell in love and got married in 2008. They separated in 2012 but remained close friends.

Brown, a beloved figure in the poker community for his generosity and positive attitude, died of cancer in 2014 at age 52. Since then, Rousso and other poker stars have hosted annual Chad Brown Memorial Charity poker tournaments.

“I don’t know if many people know this but Chad is a Leo. He loved to be the center of attention, he had a flare for the grandiose,” Rousso said prior to a 2013 charity tournament. “He would look at it like he was going out with a bang and celebrating his life with all the poker players that he loved. He was a poker player through and through and I know he is looking down proudly.”