Usain Bolt’s Retirements Gives Him Time to Focus on Poker

Usain Bolt hung up his spikes after finishing third in his last solo race, which means he now has more time to focus on his budding poker career. 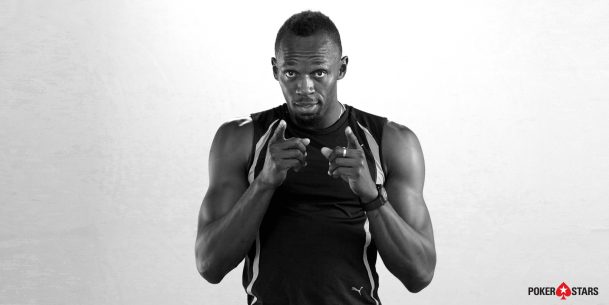 Usain Bolt has officially retired from athletics which means he’ll have more time to focus on his partnership with PokerStars. (Image: PokerStars.com)

The 100 meter final at the Athletics World Championships in London was supposed to be Bolt’s golden farewell to the event he’s dominated for the best part of a decade.

But despite being the fastest man to ever set foot on a track, Bolt couldn’t get close to his 2009 world record of 9.58 seconds.

Following a less than speedy start, Bolt rallied to finish third behind Christian Coleman and the eventual winner, Justin Gatlin. On his own performance, Bolt was critical of his start but was gracious enough in defeat to praise the efforts of Gatlin.

During his post-race interview with the attending media, Bolt said that he was happy with his career but explained that he won’t be going back on his decision to retire from the sport.

With a large gap left in his schedule, Bolt may now have more time to focus on his partnership with PokerStars.

The Jamaican sprinter partnered with the online poker site back at the start of June and immediately called out comedian Kevin Hart. Part of an ongoing promotion dubbed #GameOn, Bolt and Hart are now working to make poker “fun” again.

Launching the campaign with a movie-like trailer (which also featured former UFC light heavyweight champion Tito Ortiz), the pair previewed what’s set to become a high profile social media battle. Much like PokerStars’ #RaiseIt promotion that saw the likes of Cristiano Ronaldo and Neymar Jr. try to outdo each other with a variety of tricks, #GameOn will push Bolt and Hart to do the same.

Who Will Win the Poker Race?

Under the rules of engagement, each celebrity will have to think of a way to outwit their opponent and then post is on their social media channels. Followers of the pair will then have to vote on the feat they felt was the most impressive.

The challenge will end with a face-to-face poker battle at the PokerStars Championship Bahamas. With more than 90 million social media followers between them, the contest will certainly get more people to engage with PokerStars and, moreover, poker in general.

But with nothing left to prove on the track, #GameOn will also be an opportunity for Bolt to satisfy his competitive side. Indeed, with more time to spare, we may see Bolt join sports stars such as Michael Phelps at poker tournaments around the world.

It was my idol when I trained athletics, now a rival at Poker;)

This guy is worthy of respect. I wish him the same success in poker!