US Poker Scene Will Remain Hot in August 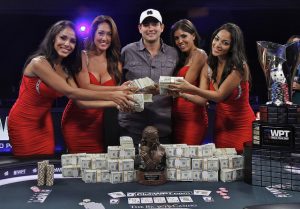 The Bicycle Casino in Los Angeles will be holding a World Poker Tour televised event in August, proving that the month is anything but dead for tournament players in the United States. (Image: WorldPokerTour.com)

It seems like only yesterday that the World Series of Poker (WSOP) kicked off in Las Vegas and by the middle of next week, the November Nine in the Main Event will be set. For many tournament players, be it professional or amateur, August used to represent a time where many would either have to take the month off or head to Europe because of inactivity. Now, the live tournament scene in the United States is thriving and August has plenty to offer for grinders.

One of the better live tournaments for the year happens to be played in August this year, as the World Poker Tour (WPT) will begin their highly popular Legends of Poker televised event from the Bicycle Casino in Los Angeles. The series begins on July 28 and features many tournaments that offer players buy-ins for as low as a few hundred bucks. Then the Main Event will kick off August 23 and wrap up on August 29, with a buy-in of $3,500+$200. The series wraps up on Sept. 2.

There are a couple of other Southern California poker rooms hosting events in early August besides the one at The Bike. At the small but very popular Ocean’s Eleven Casino in Oceanside, California, there will be a 2014 Big Saturday August $20k Guarantee tournament on August 2. After that, there will be a much larger event at the Hawaiian Gardens Casino, located in southern Los Angeles County. They are hosting the 2014 $100K Guarantee Tournament that starts on August 4 and concludes three days later.

The Heartland Poker Tour (HPT) has not one, but two, tournament series that fall on August dates. The first is the Indiana – Ameristar Casino East Chicago series that begins on August 7. There will be seven events, each with single-table satellites to get in cheaper, that range with buy-ins starting at a few hundred bucks and peaking with the $1,500+$150 Main Event that starts on Sunday, August 17. The Ameristar Casino – East Chicago is technically in the bordering state of Indiana and offers more than 56,000 square feet of casino space on four different levels.

The HPT is also holding the California – Agua Caliente Casino Resort & Spa event, which starts on August 28 and concludes on September 8. This series stop will again feature eight events, which culminate with the $1,500+$150 multi-day main event. The final table will be televised and played on Monday, September 8, with spectators welcome to watch the action unfold. Agua Caliente is one of the most popular poker rooms in the greater Palm Springs, California area and features comfortable accommodations, an incredible spa, and a great pool to cool off in.

While the Bay 101 Open event series in San Jose, California used to be a lot bigger than it’ll be this year, there is no reason that players should skip this series of seven strong events. Buy-ins range from just $125 all the way to the $1,000+$80 No-Limit Hold’em Main Event to be held on August 16 which will be played over the course of three days.

Foxwoods, perhaps the best poker room in the Northeastern part of the United States, is hosting a WSOP Circuit event from August 14 through August 25. It kicks off with a $365 No-Limit Hold’em $75k Guarantee tournament. Players should circle August 23 on their calendars as the Circuit will hold their Main Event on that date in the form of a 3-day $1,500+$125 No-Limit Hold’em 500K Guarantee tournament.