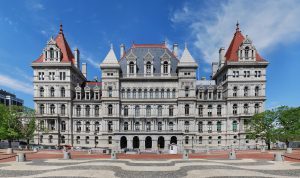 The New York State Legislature, where online poker came up short, despite making huge strides in the Senate. (Image: Wikipedia.org)

New York’s legislative session is due to end today (Friday), a day later than anticipated, with a vote on whether to legalize DFS highly expected. Online poker, it seems, has bitten the dust and missed the omnibus, bar a miracle, thanks to an apathetic Assembly.

This just goes to show how vital it is for US poker players to make their voices heard, and, at a time when there is still a slim hope in California, Pennsylvania, and Michigan that the pols can get the job done, pro-poker lobbyist like the Poker Players Alliance and Amaya are pleading for players to contact lawmakers to state their support.

Despite its failure this session, the situation in New York is promising; Senator John Bonacic’s bill gained a resounding endorsement in the Senate, which surprised many observers, and that bodes well for online poker’s chances in the future.

PPA Director John Pappas told PokerNews yesterday that members and supporters of his organization had over the past week made 10,000 contacts to New York lawmakers, in both the Senate and Assembly.

“I don’t know of any other group, not even the DFS guys, who are getting that kind of activism out of players,” Pappas said.

Meanwhile, in Pennsylvania, while Representative John Payne’s online gambling and poker bill was apparently rejected last month, noises are emanating from the House that it may be revived.

Two drives to regulate online poker were rejected and then unanimously voted for reconsideration in Harrisburg last month, and Republican lawmakers in the House are reportedly counting votes to see if they can return to the floor, hopefully within a week or two.

Pennsylvanians, there has never been a better time to make your feelings known to your state lawmakers. We suggest you visit: theppa.org/fight4poker to learn how you can do this.

Over in California, impediments remain, but Representative Adam Gray has made more progress this year than we’ve seen during the last decade that the online poker question has been debated.

Following a hearing this week, amendments are to be included that may tweak the suitability clause to freeze bad actors out of the market until 2021 unless they pay $20 million upfront to the state. They’re also tweaking the license fees and tax rates to ensure that the state gets its fair share of the spoils in the event that the industry generates less than the 60 million it has promised to the racing industry. Then, it’s back to the House Appropriations Committee for a vote that could propel it to the House floor.

Whether this will be palatable to the so-called Pechanga Coalition remains to be seen, but a greater number of stakeholders than ever before have lent their support to the bill and it’s clear there is a more determination in California to get that bill over the line than there has ever been.

In Michigan, Senator Mike Kowall has said he is confident that online poker can pass this year, but without a companion bill in the House, a sudden swell of grassroots support could make all the difference.

“Today, lawmakers are considering online poker legislation in the state houses of California, Michigan, New York and Pennsylvania […] There’s real, growing momentum pushing for licensing in these states and we’re now closer than ever to the finishing line.”