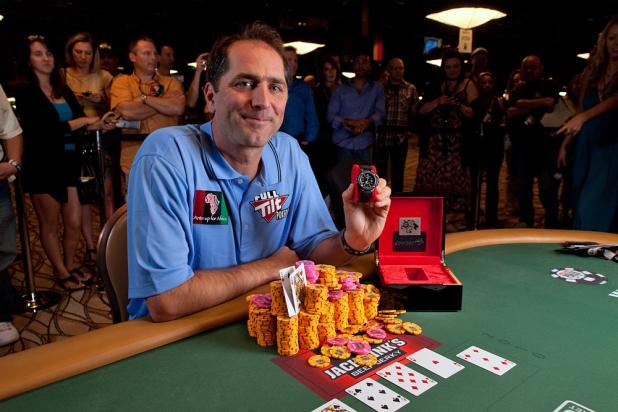 A University of Oregon’s Young American Liberty Group poker tournament stirred emotions when guns were offered up as prizes for the top players. Poker pro Phil Gordon stood behind the idea of the freeroll, but was less enthusiastic about the concept of guns as prizes, per his Twitter response to our story after it published. (Image: wsop.com)

The University of Oregon recently offered students more than philosophy and history to ponder.

According to the Facebook page of the university’s chapter of Young Americans for Liberty, a campus political organization, members of the group were invited to attend a free poker tournament on November 20, with two of the prizes being high-powered guns.

What do poker and handguns have in common, you ask? Well, assuming you don’t refer to pocket aces as “bullets,” then the standard answer could be anything from Dead Man’s Hand to the Wild West.

And if you’re a member of that Oregon State University chapter of Young Americans for Liberty, then guns and poker make the perfect combination.

As advertised online, the Oak Grove Gun Shop in Eugene donated a .40S&W Sig Sauer handgun, while the Mazama Gun Shop donated a Weatherby Vanguard 243 Rifle with a Simmons Scope 3.5-10/40.

But tournament organizers faced resistance from a number of university faculty members. After asking the University of Oregon for funding and a place to host the event, the organization was refused on both counts.

Despite the rejection, the Young Americans for Liberty appealed on grounds that the university’s decision wasn’t “content neutral.” With help from other backers, the tournament still went ahead as planned, despite opposition from a variety of sources.

Regardless of the public’s opinion as to whether a pair of guns should be offered as prizes in a poker freeroll, the Co-President of Oregon’s Young American Liberty group, Thomas Tullis, suggested that the university was trying to silence certain views.

As yet the results of the event haven’t been published online. But reaction to the story has certainly sparked a series of debates across the US.

Although the organization’s mission is to “identify, educate, train and mobilize youth activists,” many felt the decision to offer guns as a prize just over one month after a student at Umpqua Community College in Roseburg killed nine people was insensitive.

However, there was one familiar face from the poker world who didn’t agree with such objections. Former Full Tilt pro Phil Gordon may not be as active in the poker world as he used to be, but he was asked to attend the event, thanks to his public support of libertarians.

Unfortunately for the organizers, Gordon wasn’t able to join the action, but he did wish those involved a “successful all-in” and sent some autographed copies of his strategy books to go along with the guns.

Phil Gordon responded to our article via Twitter message as follows:

“Your interpretation of my ‘support’ for the event was incorrect. I was upset that the administration thought that offering a “freeroll” was essentially gambling. I did not explicitly approve of the prizes being offered, but I found it offensive that the administration had a problem with a freeroll poker tournament. For the record, I think the YAL should have the rights to offer any prize acceptable by law. And I think the students should have the right to play a free roll poker tournament for those prizes.

I did reach out to Thomas and offer my support for their hosting a poker tournament freeroll. But in my message to him, I said that I didn’t particularly believe that the prizes being offered were in good taste or maybe even appropriate.”