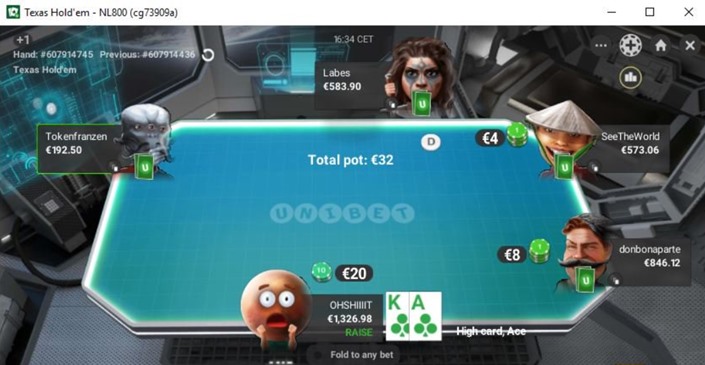 Unibet says no more to players of NL800 and other “high stakes” games, after seeing too many newbies at these tables burn through their starting bankrolls. (Image: High Stakes DB)

As of Jan. 1, the site has removed cash game buy-ins exceeding €400 ($482). This includes eliminating the site’s somewhat popular €800 no-limit hold’em and PLO tables. Though that hardly constitutes “high stakes” in a poker world where players can regularly be found trading six-figure pots, it still sets a bar that tends to differentiate recreational players from pros.

Unibet added the higher stakes games last March. But according to a press release issued this week, the games went against the site’s “philosophy.” Though the company didn’t elaborate on their views of Aristotelian vs. Socratic poker dialogues, the message they’re sending is one that rolls out a welcome mat for amateurs and recreational players, despite some of the bigger table play that started showing up on YouTube.

“Our main priority has always been to safeguard the ecology of our site as everything we do is ultimately built on that foundation,” said David Pomroy, Unibet’s head of poker. “The addition of NL800 and PL800 had contributed to short-handed games and slightly faster loss rates of recreational players at our higher stakes.”

Despite the apparent shift in strategic direction, Unibet insists it won’t be abandoning higher stakes players altogether. The company did not, however, specify what sort of promotion it plans to offer. The press release said they might consider bringing back bigger cash tables “once the company feels that a sufficient support structure is in place.”

Pomroy told Gaming Intelligence that the decision to can the bigger games wasn’t urgent, but said these games were often “short-handed” and, without explanation, caused “slightly faster loss rates of recreational players at our higher stakes.”

“This decision doesn’t change our long-term ambitions to continue growing the site but right now our focus is on ensuring that we continue to offer a non-predatory environment and the most enjoyable cash games online,” Pomroy said.

Are the rakes non-predatory?

“Unibet says no more to players of NL800 and other “high stakes” games, after seeing too many newbies at these tables burn through their starting bankrolls. ” – Did one of the newbies “jump off a bridge”, and when did blowing your wad or suicide stop a gaming company? Since when does a company take away a product that is working, “ecology”? Collusion at the big boy tables?!? I’d stick with this story Mr. Sofen, this company’s parent company’s stock, Kindred Group, is trading at its highest levels ever today. Something doesn’t make sense, add up here and I think you’re on to it.