The Vegas Golden Knights defeated the Arizona Coyotes 5-2 Tuesday night at T-Mobile Arena in the first ever regular season NHL game played in Sin City. Die-hard hockey fan and poker pro Daniel Negreanu was one of many stars in attendance to witness his hometown team move to a surprising 3-0 on the young season after a heartfelt pregame ceremony to honor the 58 victims killed in the October 1 mass shooting less than a mile from the arena. 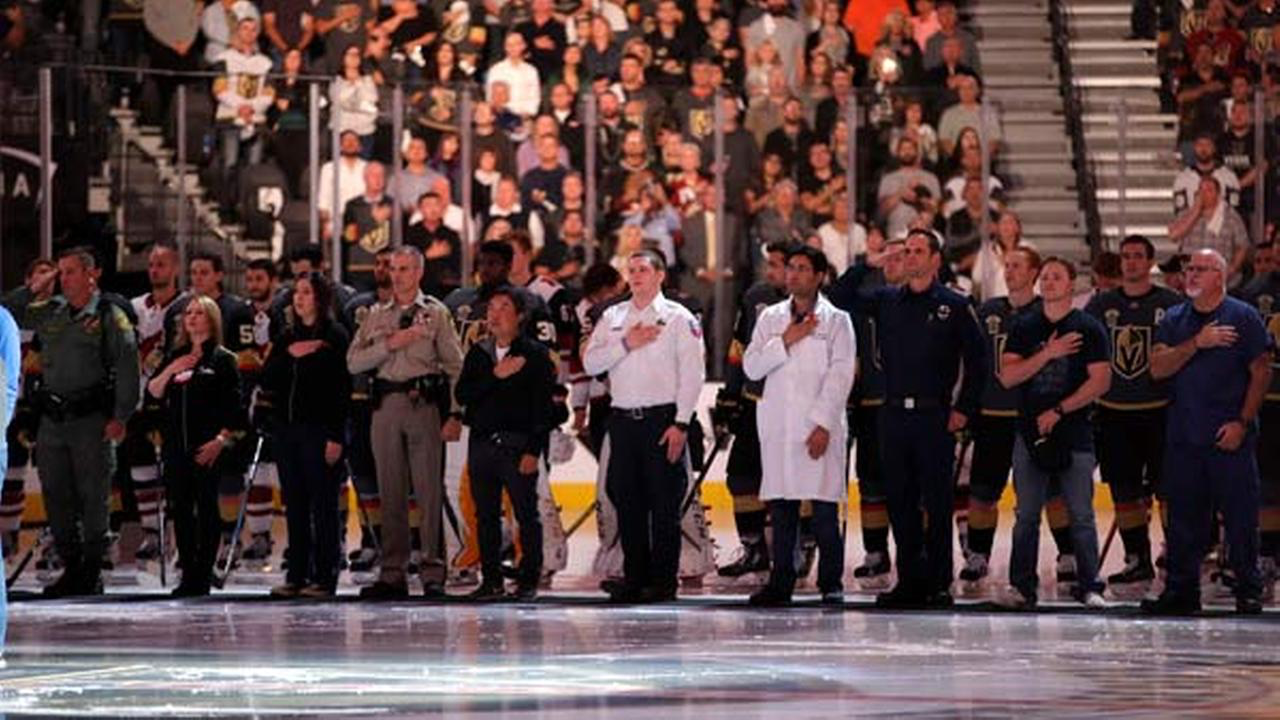 The Vegas Golden Knights honored first responders and the 58 innocent people killed in the recent Strip massacre prior to skating to victory in the team’s home opener at T-Mobile Arena. (Image: ABC 7 Chicago)

It’s not quite time to plan a championship parade for the NHL’s newest expansion team. The Knights still have 79 games remaining before the lengthy NHL playoffs next spring. But virtually no one could have predicted such an impressive start to the season.

In ESPN’s power rankings last week, Vegas was ranked 31st out of 31 teams. But after three games, Sin City’s first NHL team is the only 3-0 team in the Pacific Division of the Western Conference. They also became the first team in the league’s 100-year history to start their inaugural season at 3-0.

(The St. Louis Blues currently have the best record in the NHL, at 4-0.)

After playing its first two games on the road, Vegas is in the midst of a seven-game homestand with the Detroit Red Wings up next on Friday.

The Golden Knights have already been a thorn in the Coyotes’ side, having defeated the in-division foes the past two games.

On Tuesday, Vegas served the Coyotes a heavy dose of James Neal. The 30-year-old left winger is off to the best start of his 11-year NHL career, scoring five goals in the team’s first three games. He had a pair of 1st period goals last night.

When the NHL announced Las Vegas would host a franchise, many questioned if locals would even care. It was clear on Tuesday that hockey in the desert is as popular as anywhere. The T-Mobile Arena was jampacked and the crowd, waving white #VegasStrong towels in support of the mass shooting victims, was energetic.

Negreanu was in attendance, sporting a gray Golden Knights home jersey. He also partook in the pregame festivities at the nearby Park entertainment district. After the game, the Canadian-born hockey fan was a guest on Fox Sports 1340 AM postgame show, helping introduce fans in his current hometown to the game he grew up with.

The Golden Knights’ home opener came just eight days after the largest mass shooting in modern US history occurred less than a mile from the T-Mobile Arena, with the city still greatly saddened.

The 58 people who died and the first responders who saved so many others were remembered and honored before the game. Each victim’s name shined brightly on the ice during a 58-second moment of silence, one second for each life taken too soon.

A white flag with black #VegasStrong lettering was placed on each seat in the arena for fans to wave during the game. The victims may be gone, but Las Vegas will not allow them to be forgotten.