Uncomfortably Numb: Alcohol, Caffeine and the Quest for a Poker-Enhancing Buzz

I was reading the sports page the other day and there was yet another story about a football player being banned from the NFL because of his violation of the league’s policy on performance-enhancing drugs. He failed a drug test, testing positive for an anabolic steroid. 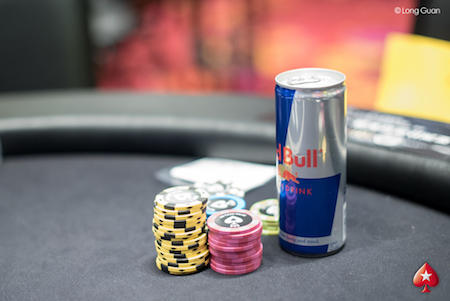 Substances like Red Bull may give poker players wings, but will that be enough to take down the pot? (Image: Long Guan/PokerStars)

Performance-enhancing drug use (PEDs for short, also known as “doping”) has affected just about every major professional sport, international competition (like the World Cup or the Olympics), and even horse racing. Athletes have abused amphetamines, diuretics, stimulants, and other substances proven to artificially improve their body’s ability to perform. They have been punished with bans, vilified in the public eye, denied access to various Halls of Fame, and their medals and honors have been stripped away.

Not so for professional poker players.

While anti-gambling zealots may attempt to discredit and even criminalize poker, to the credit of our fellow players, it’s remained for the most part PED-scandal free.

This Is Your Brain on Poker

PED disqualifications may not have hit the poker tournament circuit, but we’d be fooling ourselves if we declared poker drug-free. It isn’t. One study from 2010 found that 4 out of 5 players at the WSOP admitted to ingesting something at the table to give them an edge.

Visit any live poker game anywhere and you are likely to see at least a few players in the game conspicuously imbibing two mind-altering substances: alcohol and caffeine.

Both are surely drugs. They have an effect on our bodies and our performance. Let’s look at them each in turn, to at least consider some questions about them. Is their use positive or negative? Can they be harmful? Is it okay to use them?

Alcohol’s effects and side effects are well known. The drug is a sedative.  It slows reaction times, induces sleepiness, and diminishes inhibition. As such, though its use may be pleasurable, it surely doesn’t enhance a poker player’s performance.

Just about every serious instructional text about poker recommends that poker players not drink alcohol while they play. And for good reason. As a sedative, alcohol may cause us to become tired, sleepy or otherwise inattentive, which is surely bad for our game.  By reducing our inhibitions, it may cause us to ignore the conscious decision-making that defines our best game.

Similarly, it may hurt our self-awareness and self-control, making it more likely that we go on tilt, destroying our game in the process.

In a casino game, watch for players nursing a single beer — they are almost certainly a local grinder, in the game more to make money than have fun. If they three-bet you all-in on the river, you can be confident that your third-nuts is no good.

Even so, drinking alcohol while playing can be “useful” in a home game.  If everyone is drinking beer or bourbon and you’re only drinking water or coffee, you might signal to everyone that you’re a serious player, putting them on their guard.

They may decide that they need to play their best game – something you would want to discourage. Or, even worse, they might decide not to invite you the next time.

Your imbibing, at least modestly, may also encourage others to drink.   If you’re sitting down with Red Bull, coffee, and water, you might set a different tone than if you start things off with a Budweiser. It can be helpful to signal to others that this is a more relaxed affair, especially if you’re drinking moderately while others tend to get carried away.

Caffeine, on the other hand, is a stimulant, affecting the central nervous system. It can keep you awake and alert so you can take advantage of a good game for much longer than you could without caffeine. Caffeine also increases muscular and brain function.

Does caffeine give a poker player an unfair advantage? Surely not. It’s fully available to anyone who wants it. It’s also fully legal and allowed in all competitive events. This was not always the case.

Up until 2004, the World Anti-doping Agency (WADA) banned extremely high quantities of caffeine (more than the equivalent of 10 cups of coffee).  They are now studying the possibility of imposing the ban again.

But even though caffeine is fully allowable and available, do poker players have anything to worry about using it, even in large quantities?

Medically, caffeine is generally safe, though there are some side effects you should be aware of. Caffeine works as a diuretic.  Without additional fluids, this can cause you to dehydrate. Other symptoms are usually minor, including sleeplessness, stomach upset, “jitters,” and headaches that can be caused by caffeine withdrawal.

Doctors generally agree that for most people it’s perfectly safe to ingest up to 400 milligrams of caffeine a day.

So how much are you consuming while you play? A typical eight-ounce cup of coffee contains roughly 100 milligrams. Of course many coffee mugs actually hold 16 ounces (the size of a Starbucks grande) – so people may be getting more caffeinated than they think.

Curiously, Red Bull was the subject of a medical study that might prove it the ideal poker beverage. According to a 2010 double-blind experiment conducted among college students, Red Bull consumption resulted in two effects, both of which might help a poker player.

Males and females ingesting Red Bull showed no elevated blood pressure when their hands were immersed in cold water. Also, both male and female participants who ingested Red Bull had increased pain tolerance.

Though it may be a bit fanciful to consider, energy drinks such as Red Bull could help you disguise your reaction to your cards as your hand progresses, muting as it does any change in blood pressure that might typically correlate with the excitement or disappointment your cards reveal.

And, by raising the pain resistance of those who drink it, Red Bull might lessen your chances of going on tilt – by rendering painless any bad beats, long losing streaks, and otherwise upsetting experiences at the poker table.