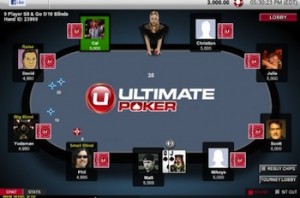 Ultimate Gaming dramatically left the New Jersey online gambling market over the weekend, while accusing its land-based partner, the Trump Taj Mahal, of “multiple contract breaches.” The company ceased operations at 11:59 EDT on Sunday night, just two days after it announced its intention to quit the state.

A statement on the Ultimate Poker website urges players from New Jersey to cash out their balances using the normal withdrawal procedures. Balances that have not been claimed by September 28 will be sent as a check to the address on file. Existing “U-dollars” and tournament tickets will also be refunded, said the company.

Last in the Market

Despite launching in Nevada as America’s first-ever fully licensed and regulated online poker site, Ultimate Gaming’s New Jersey operations have been a financial disappointment. While Ultimate Poker runs a close second in the Nevada market to #1 WSOP, the former failed to gain a foothold in the Garden State, where it garnered only just over one percent of total online poker revenues. While its online gambling version Ultimate Casino fared slightly better, generating around $500,000 per month, Ultimate Gaming was ranked last out of New Jersey’s six Internet gambling operations; the $4.9 million in profit it has taken so far this year is dwarfed by market leader Borgata and partypoker’s $30 million.

“We wish things would have turned out differently for us,” said Marc Falcone, chief financial officer for Station Casinos, which owns Ultimate Gaming. “Unfortunately, as they say in poker, we were not dealt a good hand,” he added, referring perhaps to its unfortunate choice of partner in the Trump Taj Mahal.

The Taj’s owners, Trump Entertainment, filed for Chapter 11 bankruptcy two weeks ago and has said the 2,250-room property will shut down mid-November unless it receives concessions from its creditors and the unions. Among its many creditors is Fertitta Acquisitions Co., a company linked to Ultimate Gaming and Station Casinos, to which it owes $1.5 million.

Betfair’s New Jersey operations were thrown into jeopardy by the closure of the Trump Plaza earlier this month as well. Under New Jersey gaming regulations,an online operator must partner with an existing land-based licensee in order to offer remote gaming. However, the DGE has offered Betfair a concession, allowing it to continue to operate until it finds another partner or, like Ultimate Gaming, opts to leave the state.