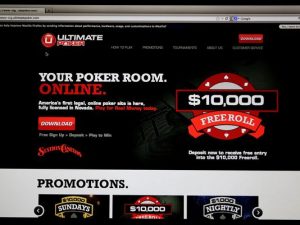 The markets between online gaming and land-based casinos aren’t always as divided as their geography suggests. Online poker rooms and events are sponsored at brick-and-mortar casinos and vice-versa. Bally’s recent integration of a World Series of Poker– themed room in their Atlantic City location shows that digital and physical gaming can embrace each other. Now, a new deal between an online poker room and a group of Northern Nevada casinos is looking to make the ultimate partnership.

Ultimate Gaming at the Peppermill

Station Casinos-owned online poker room Ultimate Gaming has announced a deal with the Peppermill Resort Spa Casino in Reno, Nevada. In addition, four other Northern Nevada casinos operated by the same company are joining in the accord. The Western Village Inn, the Rainbow Hotel Casino in Sparks, the Montego Bay Hotel Casino, and Peppermill Hotel Casino in Wendover are the four other properties included in the Internet cross-marketing deal.

Under this new partnership, UltimatePoker.com will be the online poker stop for the casinos, with the goal of creating a mutually beneficial partnership to expand the customer base for Ultimate Gaming and the land casinos involved. However, the deal still has only received preliminary approval from the Nevada Gaming Control Board. The Nevada Gaming Commission will make a ruling later in the month. Because approval hasn’t been finalized, a launch date for the deal is still being considered. While the terms of the agreement weren’t divulged, the Peppermill will get a piece of the poker revenue generated by Ultimate’s online players.

Ultimate Gaming CEO Tobin Prior publicly stated that their organization is extremely enthusiastic about this new partnership. He believes that it will allow Ultimate Gaming to bring their unique online poker product to the Northern Nevada market via Peppermill’s existing customer database.

When it was launched last April in Nevada, Ultimate Poker was the first regulated real money online poker site in the United States. Now, after creating an account online, players will be able to add money to their account and cash out winnings at the Peppermill and its Northern Nevada brethren. The deal also applies to other Station-owned casinos across Southern Nevada.

Ultimate Gaming’s presence in the Peppermill will also give the site a new geographical advantage. Before the deal was inked, most of Ultimate’s business was based out of Southern Nevada. Caesars-operated WSOP.com – Ultimate’s chief rival in the Silver State – did business in Reno as well. The Peppermill deal will help raise Ultimate’s advantage in the battle for the North.

Without a doubt, Ultimate will seek out more deals with other casinos in the future. Ultimate also handles the online betting component for the Trump Taj Mahal in Atlantic City. With over $800,000, the Taj Mahal brought in the third-highest revenue in New Jersey. Caesars and Borgata control a bulk of that state’s online market.

Billy Paganetti, general manager of Peppermill for its Northern Nevada locations, looks to the deal with anticipation. He stated that he feels that it is wonderful that Peppermill’s customers can be offered an exciting and safe online poker site to play from, in the form of a business partnership with Ultimate Gaming.