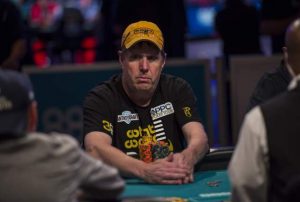 Mark Kroon is one of two men leading an effort to legalize poker in Wisconsin. (Image: Las Vegas Review-Journal)

It should be simple to figure out if poker is legal or not, but in many states, the situation is much more confusing than that.

Making it even harder on players is the fact that while state officials might make it clear that home games are just fine (even if technically against the law), there is always a point where a poker group might become large enough to attract attention and get shut down by authorities.

That’s the case in Wisconsin, where two men are looking to make it expressly legal for poker enthusiasts to host poker games without fearing legal repercussions.

While tribal casinos in the state can offer poker legally, that’s not the case right now for private citizens.

One of the two men, Mark Kroon, owns an establishment known as Players Sports Bar in Madison, Wisconsin. Kroon used to host small poker tournaments at the bar, but stopped after the Department of Justice (DOJ) warned him that the activity was illegal.

“When the DOJ first came into my bar and said ‘Hey guys, you gotta knock it off of we’re going to close you down,’ we took it seriously,” Kroon told NBC 15.

You may not remember Kroon’s name from this summer, but he made an excellent run in the Main Event. He finished in 43rd place, winning more than $160,000 in the process.

Kroon also has a WSOP Circuit ring, and has cashed three times in the WSOP Main Event during his poker career.

In his efforts to find out what could be done about the poker situation in Wisconsin, Kroon worked with Steve Verrett, state director for the Poker Players Alliance. Verrett had been working since last year on an effort known as “Legal Poker in Wisconsin.”

The goal of that campaign was to get a declaratory judgment from a judge that would define whether live poker was legal or not. The hope was that poker would be deemed a game of skill, and thus be seen as legal under Wisconsin law.

“This is very real and if all is successful, we could see Wisconsin have the same types of poker facilities as California and other states,” Verrett told PokerNews at the time.

Kroon’s situation dealt with exactly this issue, and with some help from the poker community, the two men were able to push forward with their plan to get a ruling.

“Once they said we couldn’t do it, we stopped and we decided just to fight it,” Kroon said. “The whole poker community banded together and raised $10,000 to get a great lawyer.”

Those efforts may finally bear fruit next week. That’s when a judge in Dane County is expected to make a ruling on how Wisconsin law should be interpreted in this case, the first step towards reexamining poker laws in full.

Wisconsin’s poker laws are also part of a case that could soon find itself in front of the US Supreme Court.

In April, the Seventh Circuit Court of Appeals ruled against the state in a lawsuit seeking to stop the Ho-Chunk Nation from offering video poker at its casino in Madison.

The state believes that video poker is a “Class III” card game, and is thus prohibited by the compact between the tribe and the state government.

However, the Seventh Circuit court ruled that because Wisconsin doesn’t prohibit the tribe from offering traditional poker games, other non-banked card games (including video poker machines) should also be allowed.