If actor James Woods and poker pro Vanessa Selbst were to face off at the poker table, we know who would have the advantage. But in the world of Twitter, it’s not always so clear. 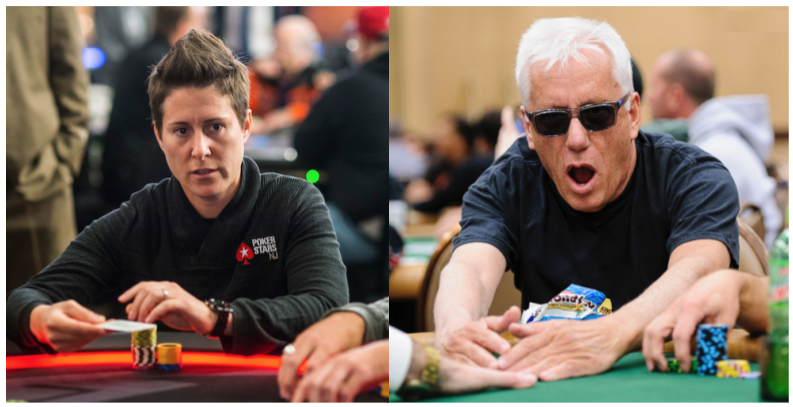 Vanessa Selbst and James Woods took to Twitter to address terrorism in New York, and before long it devolved into personal attacks from his followers. (Image: PokerStars / WSOP)

“I thought everyone on twitter was irrational,” Selbst tweeted, “but it turns out I’m just in a feedback loop generated by a @RealJamesWoods retweet. AHHHHHH!!!”

Selbst had unintentionally provoked a Twitter fight with actor and poker aspirant James Woods on Wednesday. The exchange between them and their followers turned into a display of how well-meaning political discourse can quickly step into the lower depths of American free speech.

The two are clearly political opposites, but things got heated after some of Woods’ 978,000 followers, many of whom have some semblance of #MAGA or #AmericaFirst on their profiles, began chiming in.

Selbst has nearly 96,000 Twitter followers, not as many as Woods but a formidable following nonetheless, presumably with a higher percentage who are representatives of the poker community.

She Said, He Said

Selbst knew she was asking for potential trouble when she tweeted after the recent terrorist attack in lower Manhattan:

“Stop talking about terrorism, it really isn’t a big deal vis a vis actual threats to humans. (Gonna catch some flack for this). #NYCStrong.”

Selbst, a PokerStars Team Pro who’s never held back on revealing her liberal political leanings, was attempting to make the point that more people in America die from other causes than terrorism, and that talking about it too much helps the terrorists. As her tweet suggests, she knew was inviting criticism.

Woods’ initial response was a sober point worthy of debate. “But the underlying strategy of ‘terrorism’ is to create malaise in the emotional well being of a people,” he tweeted. “It’s not solely a statistical issue.”

Her response: “Not that I have any interest in engaging with you bc you’re a lunatic, but I’m pretty sure you’re agreeing with me w/o realizing it.”

Selbst’s “lunatic” jab got the outspoken conservative Hollywood celebrity to suggest that insults such as this were a “classic liberal tactic,” which was enough of a dog whistle to rally his trolling troops.

Shortly before sending that tweet, Selbst claimed Woods had blocked her on Twitter, meaning she no longer could see his tweets about her. But the poker community was rallying to her defense.

“I would be so embarrassed to reach my 70’s and still be mocking people for how they look,” poker pro Jamie Kerstetter said while using her acerbic wit to mock the actor’s age.

High-stakes hedge fund manager Bill Perkins also chimed in: “I wonder if you said ‘calling James Woods a good actor was generous’ how he would react or feel?”

Daniel Negreanu was more direct: “This old ass cracker is a real piece of sh*t.”

Selbst, to her credit, shrugged off Woods’ gender challenge, and even somewhat agreed with his assessment.

“Well I don’t really identify as a girl or a guy, think I’m somewhere in between,” she replied to Kerstetter. “So he’s sorta not wrong, altho ‘generous’ is a weird term.”

Both Woods and Selbst come from different backgrounds and share opposing political views. But they also have more in common than they probably realize. They love poker, have more money than the average American, and are often criticized for expressing their political views on Twitter.

Perhaps, these two poker players can put aside their differences and hug this one out? Of course, Woods would have to unblock her first.

I have seen Selbst melt down at the poker table to an extreme that would put Phil Hellmuth to shame. Obviously, she is calmer and more thoughtful off the felt. Good for her for taking the high road. Now if only James Woods, the poker community and the rest of the World could be a little less “Presidential”.