Twitch to Debut Virtual Currency with Emphasis on E-sports Betting 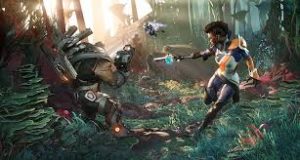 Twitch has announced that it will introduce its own in-game digital currency, “Stream+.” Speaking at the annual TwitchCon on Thursday, Patrick Gilmore of Amazon Game Studios, which owns the video game streaming site, announced that Stream+ would debut with Amazon’s new multi-player team-based combat game, Breakaway, and would “integrate directly” with Twitch.

“Stream+ is a loyalty points system where players can earn points by watching streams,” said Gilmore. Stream+ points could then be spent on “polls and wagering,” he added, although he declined to go into greater detail about how the new economy would function.

According to the BBC, a subsequent demonstration video showed a player wagering on the outcome of a Breakaway tournament for the chance to win more points

Amazon is clearly unfazed by the recent skin-betting scandal that engulfed Valve’s Counter-Strike: Global Offensive multiplayer first-person shooter game. Valve, which owns the Steam gaming platform, was forced to dismantle the multi-billion dollar gambling industry that had grown up around the trading of “skins” after it faced at least two lawsuits accusing it of facilitating underage gambling.

Skins are colorful designer weapons found within the game, whose varying degrees of rarity allow players to attach real-world value to the items. Meanwhile, the ability for skins to be transferred to third-party sites meant that they could be bought and traded like a currency. And where there’s currency, there’s gambling.

It’s estimated that in 2015, over 3 million players bet $2.3 billion worth of skins on the outcome of e-sports matches and lottery style gambling games, many of whom were undoubtedly under the legal age to gamble.

Feeling the heat, last June, Valve gave the third-party gambling sites 10 days to shut themselves down, adding that they were in direct violation of Steam’s terms and conditions. The sites had no choice but to comply. The biggest skin gambling site CSGO Lounge recently relaunched as an esports betting site that uses its own new digital currency, “Lounge Coins.”

However the Stream+ economy functions, it’s likely to come under the scrutiny of gambling regulators who are unwilling to allow new kinds of digital currency gambling to flourish under the radar, as skin-betting did for so long.

“Like any other market, we expect operators offering markets on eSports to manage the risks, including the significant risk that children and young people may try to bet on such events given the growing popularity of eSports with those who are too young to gamble,” said UK Gambling Commission General Counsel Neil McArthur last month.

“We are concerned about virtual currencies and ‘in-game’ items, which can be used to gamble,” he added.