The Trump Taj Mahal poker room in Atlantic City closed its doors in February of 2015, in the midst of the casino’s bankruptcy proceedings. As of next Friday, the legendary card room will reopen once again, beating the odds, much as its namesake did on Tuesday night in the Indiana primary. 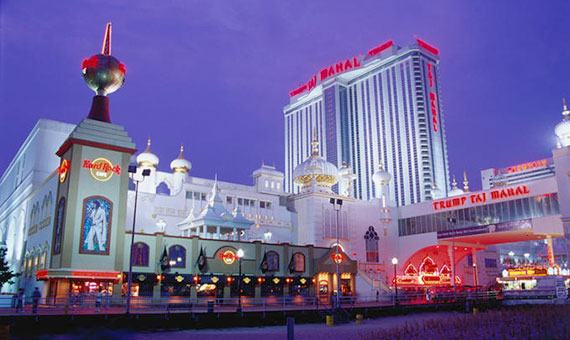 The iconic Trump Taj Mahal Poker Room will reopen its doors on May 13 in Atlantic City, New Jersey.  The room was made famous in the popular poker film Rounders. (Image:  therealdeal.com)

The reopening comes right on the heels of Donald Trump virtually securing the GOP presidential bid, but also sheds light on one of the Donald’s numerous failed business ventures, a topic which has been brought up many times by his opponents during this contentious election season.

The Trump Taj Mahal opened in 1990, after the property was originally purchased by the future GOP nominee in 1987.

Trump said it would take one year to build the hotel and open up shop but his estimation was way off base when his company, Resorts International, struggled to come up with the funding.

By 1991, the billionaire had gone through his own bankruptcy, and was forced to give up 50 percent of his stake in The Taj.

Trump Hotels & Casino Resorts, his other major company, then purchased the casino in 1996. But the man who likes to let the world know what a successful businessman he is, again was forced to file bankruptcy papers on The Taj in 2014. As a result, its poker room was shut down in 2015, and the property subsequently sold off to Carl Icahn of Tropicana Resorts this year.

Rounders Made It Iconic

Most poker players are familiar with the poker room at The Taj, whether they’ve been there or not. Some learned about it in the 1998 movie Rounders, when Matt Damon and Ed Norton’s characters drove out to Atlantic City to play some cards at Trump’s casino. At one point, Mike McDermott (Damon) tells a story about an encounter with poker pro Johnny Chan, who appeared in the movie.

“I never told anybody this, about eight, nine months ago, I’m at the Taj, it’s late and I see Johnny Chan walk in and he goes and sits in the three hundred-six hundred section and the whole place stops and everybody puts an eye on him,” Damon said as McDermott.

“After a while there wasn’t a craps game going on because all the high rollers are over there watching and some of them playing but they’re giving their money to him and say ‘oh, I played with the world champion’, you know what I did?”

What he did, according to the story, was sit down at the table and bluff Chan in a big pot.

The story isn’t real, of course, since it’s from the movie. What is real, however, is that the poker room at the Taj Mahal is arguably the most legendary card rooms in Atlantic City.

The Taj, to promote the return of its poker room, will be giving away 50 HDTV’s the first three weekends of operation. It will reopen in its newly renovated form at 11:00 am on Friday, May 13, an interesting choice of days for the often-superstitious world of poker players.

Many fans in Atlantic City are excited for its return. But it will be difficult for the Taj Mahal to compete after its absence with the now-popular room at the nearby Borgata.

Just 10 days after Trump knocked his rival Ted Cruz out of the Republican race, his former poker room will reopen. Let’s just hope, for poker’s sake, that the newly renovated poker room at The Taj does just as well in the Atlantic City poker industry as its namesake has done against “Lyin’ Ted” in his bid to win the Republican nomination for president.

If it has a Trump name it will be very risky due to the fact of hos racist selfish remarks. Extremist will make number one target, for sure!