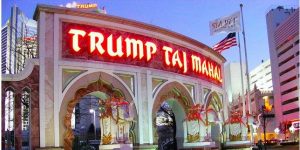 The Trump Taj Mahal has closed its doors for good. (Image: businessinsider.com)

The Trump Taj Mahal, once an east coast poker hotspot, is closing its doors for good after 26 years.

An Atlantic City icon, the casino was originally founded by Resorts International in 1983. After struggling to get the proper financing to complete the project, current presidential candidate Donald Trump bought a controlling stake in the company in 1987 and claimed he would complete construction within a year.

Finally, on April 2, 1990, after years of financing issues, the casino was open. At the time, Atlantic City had a booming casino industry. It was often referred to as the Las Vegas of the east. But times have changed. Tourism has declined in this New Jersey town, causing many casinos to close down in recent years.

Current owner Carl Icahn decided after suffering through years of losses it was time to close up shop instead of invest more money into a struggling casino. More than 3,000 people will be out of jobs due to the casino’s closure.

After Icahn’s company Trump Entertainment Resorts was unable to strike a deal with the casino’s union workers, he was left with no choice but to shut it down. More than 1,000 union employees had been on strike since July, complaining that the billionaire investor took away their benefits.

A new offer from Icahn included health insurance benefits, but was not accepted by the union. He said an additional nine-figure investment would be necessary to keep everyone happy and the casino open, and wasn’t prepared to do so.

Republican presidential candidate Donald Trump was disappointed a deal couldn’t be made to save the casino he referred to as the “eighth wonder of the world” after opening in 1990. But the businessman no longer has a stake in the company, even though his name was still attached to the building.

Trump has taken some heat from his political opponents on the campaign trail for his many bankruptcies. In 1991, just a year after opening “the Taj”, Trump filed bankruptcy, forcing him to sell off a 50 percent stake in the business.

Though it was 25 years ago, Trump received criticism on the campaign trail for failing at operating a casino while claiming to be a great businessman.

The poker room at Trump Taj Mahal was, at one point, considered to be the top place to play poker on the east coast. The U.S. Poker Championship took place at the casino, beginning in 1996 until 2010. It aired on ESPN during its early years. Daniel Negreanu, Alex Jacob, Men Nguyen, and John Hennigan are among the tournament’s 15 champions.

In February 2015, due to financial cutbacks, the legendary poker room closed down. But this past May, it reopened. Now, along with the rest of the casino, it’s closed for good.

He closed his shop than it resembles Russia