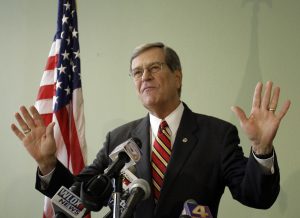 Trent Lott is part of a new legislative push to get RAWA more respect in Congress. (Photo: Alex Brandon/AP)

Former lobbyist and Senate Majority Leader Trent Lott (R-Miss.) will be lending some legislative know-how to help push through the Restoration of America’s Wire Act (RAWA) in Congress. RAWA super-backer Sheldon Adelson has a new weapon in his crusade against legalized online gambling in the US with the former lobbying giant in Lott.

The Coalition to Stop Internet Gambling (CSIG), which is backed by the billionaire Sands CEO, has hired the services of not only Lott, but several other kingpin legislators as well, including former Sen. Sen. John Breaux (D-La.) are part of the lobbying firm of Squire Patton Boggs, which boasts muscle in the shape of a coterie of well-connected former US senators.

Adelson and his CSIG initiative are embroiled in a battle to have the 1961 Wire Act reinstated to its original interpretation. He has been an opponent of legalized online gambling for some time.

The Wire Act, which was originally created to outlaw most interstate betting, was relaxed by the Department of Justice (DoJ) in December 2011, the same year as the now-infamous Black Friday federal grab of key offshore sites PokerStars and Full Tilt, among others. The reinterpretation set the groundwork for now-legalized online gaming in Nevada, New Jersey, and Delaware, with numerous other states grappling with internal issues to follow suit.

Despite the new stance, or perhaps because of it, Adelson created CSIG to push back against any legal online gambling in America.

This would essentially require that the Wire Act, which was obviously created before the Internet was a concept, to revert to its original ruling, although even that is a somewhat gray area legally, because of the change in digital devices in the 55 years since the Act was created.

Adding the backing of a coalition of influential senators and congressional staff in a push to have the Wire Act reinstated via RAWA could be a last-ditch effort to keep the mostly unfavorably received bill alive. Should Adelson be effective in his deep-pockets attempt, it would effectively ban online gambling across the US, even in states where it is currently legal.

The Department of Justice’s current position is that only online sports betting is applicable under the Wire Act.

A Lott of Influence

Interestingly, Lott and Breaux, owned their own lobbying firm before it was snapped up by Squire Patton Boggs, which means they know how to play the game in Washington, D.C. Whether that will be enough to change the tides seems unlikely, but you can’t blame Adelson for trying.

RAWA was re-introduced at the end of June and Adelson has always maintained that his support for the legislation is based on what he considers to be the potential for non-state sanctioned accessibility as well as the possibility of underage gamblers figuring out how to log on.

And although critics say his motives may have more to do with protecting his own interests in the casino industry, the reality is that the majority of land-based gambling empires, including the successful WSOP/Caesars Interactive franchise, not only support but are interested in participating in online gaming wherever it’s legal and viable.

Speaking about the re-introduction, Graham said in a statement, “Now, because of this decision by the Obama Administration [to relax the interpretation of the Wire Act], virtually any cell phone or computer in South Carolina could become a video poker machine.

“A major rewrite of a long-standing federal law like this should be made by the people’s elected representatives in Congress and signed into law by the president, not done administratively.”

Added Senator Rubio, who announced his decision to bid for the GOP nomination in the 2016 election:”Expanded gambling presents many challenges, especially on the Internet where safeguards to protect people from fraud and addiction are harder to enforce.”

Although similar versions of RAWA now sit in both the House and Senate, pro-gambling forces are hoping that the latest push suffers the same fate as in 2014, when RAWA failed to advance as part of the budget bill.