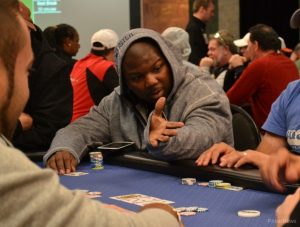 Poker player Travell Thomas has been charged with conspiracy to commit wire fraud and faces 20 years in prison. (Image: PokerNews)

Travell Thomas has more than $500,000 in career live tournament earnings, and he’s going to need every penny of that to get himself out of a sticky situation.

The United States Attorney’s Office Southern District of New York alleges Thomas was a co-owner of a fraudulent debt collection company that thieved customers out of more than $31 million over a four-year span.

Oddly enough, Preet Bharara has taken on this case, the same investigator that unsealed the Black Friday documents that would forever change the online poker industry in the United States in 2011.

Whether or not Bharara simply has it out for the game of poker is unknown, but these are serious charges placed on Thomas.

Should the poker player get convicted of conspiracy to commit wire fraud, he could spend up to 20 years in prison.

The magnitude of his alleged crime, which includes 15 co-defendants, is significant, so much so that Bharara believes this is the largest fraudulent debt collection scheme prosecuted ever.

A press release from the United States Attorney’s Office Southern District of New York accuses Thomas and his company of maliciously tricking innocent people into paying them money to avoid facing prosecution.

Thomas’ employees allegedly threatened victims by claiming to be associated with government and law enforcement agencies. The bogus debt collection company is said to have scammed thousands of people.

“As alleged, the defendants tried to trick and coerce victims into making payments to the Company by making false threats and telling a host of lies, including that the Company was a law office and that warrants would be issued for the victims’ arrests if they failed to repay debts,” according to a press release from the U.S. Attorney’s Office.

The press release detailed the company’s affairs, which includes a $750,000 payment to Thomas along with tens of thousands of dollars from company funds used to support Thomas’ gambling habits.

The defendants were arrested yesterday and faced a judge for the first time in federal court in Buffalo, New York.

Four of the defendants have already pleaded guilty to conspiracy to commit wire fraud. The remaining nine defendants will attempt to fight the allegations.

No sentences have been handed down at this time, but, if convicted, each defendant would likely face significant prison time.

Bharara isn’t messing around and clearly wants to make an example out of Thomas and his employees.

“As alleged, the defendants engaged in what is believed to be the largest fraudulent debt collection scheme ever to be prosecuted, falsely threatening arrest and prosecution of countless Americans, including those who suffered from disabilities,” He said.

“The defendants charged today allegedly took ruthless advantage of the desperate situation in which their victims found themselves, using threats and lies to coerce payment and even trying to collect more money than the victims ever owed. Thanks to the tireless work of the criminal investigators in our office, those involved in this massive debt collection scheme will no longer be able to prey on vulnerable Americans burdened by debt,” Bharara continued.

Travell Thomas had better lawyer up.

Professional poker players aren’t exactly the cream of the crop ethically speaking. Not a shocker.

I fail to see where ethics has anything to do with this situation. There are rules every poker player must follow or he/she is not playing poker. same goes for life…interesting. I think some of the smartest, most successful, outside-of-the-box-thinkers in the world play poker. they learn (probably come natural to them) while playing this game I love so much to think between the rules. this piece of shit broke the law/rules and deserves the max punishment.

i hope all of these scammers along with their co workers gets minimum 50 yrs in jail and all of their accounts confiscated . they should be taught serius lessons