Topless Dealers Cause Controversy at Battle of Malta Ladies Event

A decision to employ topless dealers during the Battle of Malta Ladies Event created significant backlash on Sunday, with players largely balking at the idea. 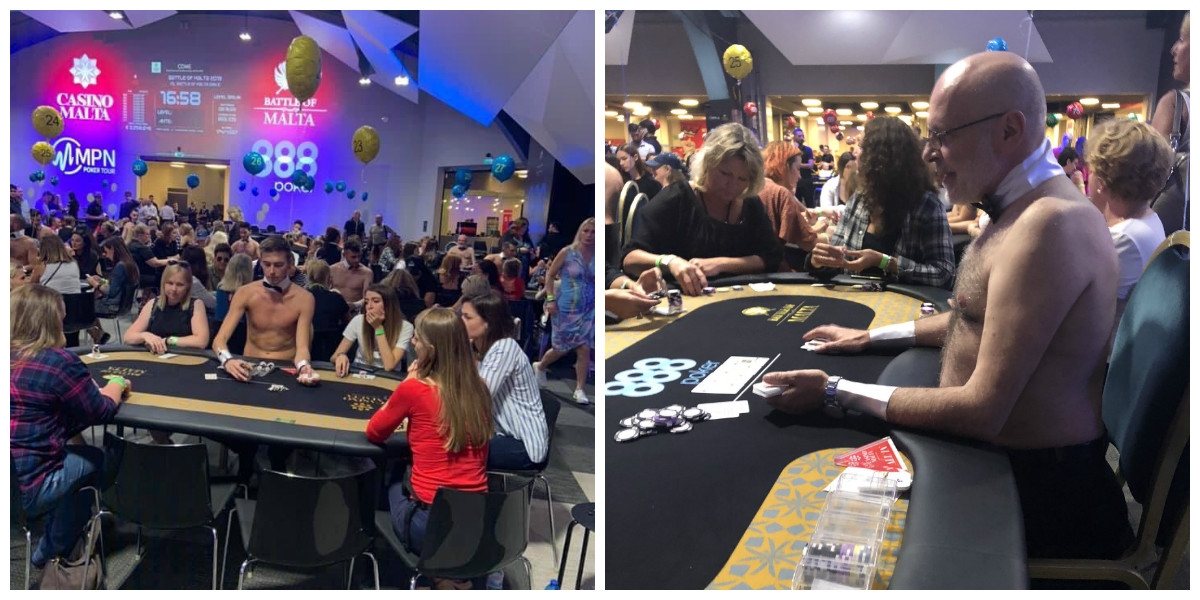 The Battle of Malta employed topless male dealers for its Ladies Event, but the idea was a flop with players. (Images: @Joeingram1/Twitter, @baltic_blone/Twitter)

The €110 ($123) event was dealt exclusively by male dealers who went without shirts in what organizers thought would be a fun, lighthearted touch in the tournament for women.

Many players raised concerns almost immediately on social media. Besides questions of whether the situation could make players uncomfortable, many also pointed out that it could be demeaning for the dealers themselves by forcing men to decide whether they were willing to go bare-chested in order to earn a night’s pay, and by completely excluding any female dealers on the staff who would otherwise be at the tables that evening.

I’ve not been legitimately surprised like this in a while,” Kara Scott wrote on Twitter. “This was a very poor decision on so many levels.”

According to reports on social media, the decision was made shortly before the tournament, and wasn’t an advertised feature for the Ladies Event. CardPlayer Magazine reported that, after the first break in the tournament, the dealers were back to normal, with both male and female employees on duty – all wearing full uniforms.

Battle of Malta Apologizes for Gimmick

Casino Malta released a statement on Monday apologizing for the poorly received idea.

Our intention at the Battle of Malta is to create a fun and welcoming atmosphere for everyone at all times during the festival,” the statement read. “We respect all our players and staff, and certainly had no intention of upsetting anyone, or making anyone feel uncomfortable. We sincerely apologize if this was the case at any time.”

The statement also promised that all registration fees from the Ladies Event would now be donated to the Pink October Malta charity. Pink October is a breast cancer awareness initiative founded by the Marigold Foundation.

The casino also seemed hopeful that it could move on from the incident before next year’s festival.

“We are very determined to grow the Ladies Event at Battle of Malta, and we are happy to announce that next year’s Ladies event will have a guaranteed prize pool of €25,000,” the statement read.

While few people actually thought the idea was well conceived, there were some who took it more lightly than others – with Jennifer Shahade making a pun that was both about the event in question, and her opinion on the structures of smaller/side events.

Speaking for myself I’d much rather have more Chippendales than more chips. https://t.co/NouQRXXSmZ

The Battle of Malta is a poker festival hosted by Casino Malta, and is running from Oct. 15-22 this year at the InterContinental Arena Conference Centre. The Main Event is currently underway, featuring over 4,600 entries and a prize pool worth approximately €2.26 million ($2.52 million).

If it’s a Casino, they can do anything. It’s an entertainment center. So as you want. The main thing is that within reason.

i think its a great!!! idea
would make my losing at poker more interesting with eye candy around