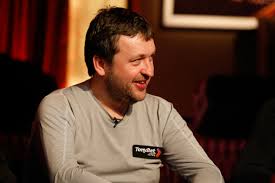 The UK’s European Union (EU) referendum appears to have become something of a betting opportunity for the world’s richest poker players following a national vote on June 23.

Even before a single vote had been cast, Tony G offered fellow Member of the European Parliament (MEP) Nigel Farage a €1 million ($1.1 million) bet on the outcome of the referendum.

Since turning his attention away from poker and towards politics as Lithuania’s EU representative, G has been needling his peers at every opportunity.

In fact, thanks to his outspoken views and brash attitude, G was named as one of the top 40 emerging MEPs in a recent article by Politico.eu.

Praised for his willingness to tackle sensitive issues, G certainly lived up to his reputation prior to June 23 when offered to bet Farage $1.1 million that the UK would stay in the EU.

Fortunately for Mr. G, Farage didn’t take up that bet. Had the British MEP called G’s bet, the latter would now be cursing his luck as the UK elected to leave the EU.

Tony G Back on the Wagon

However, G has never been one to shy away from a bet and on June 26 he jumped straight back into the fire when Tom Hall tweeted that he was interested in a political prop bet.

Addressing his tweet to Betfair, William Hill, and Ladbrokes, high stakes pro Hall asked for odds on MEP Daniel Hannan becoming the UK prime minister within the next 20 years.

Despite being a relative unknown until the UK’S EU referendum, Hannan has since become something of a figurehead for the leave (those who wanted out of the EU) campaign.

In fact, although Hannan might not be a prominent figure in British politics at the moment, the resignation of Prime Minister David Cameron does mean he has an opportunity to further his career. And while Hannan hasn’t hinted that he’s willing to run for Prime Minister, Hall appears to have some sort of hunch and now wants to bet £500,000 ($660,000) on that possibility.

Sensing an opportunity to pick up where he left off with Farage, Tony G quickly responded to the tweet by saying: “you’re set with me.”

The tweet clearly wasn’t a bluff as Hall instantly fired off an email to G with his terms, while the man himself reconfirmed his interest and said he’d accept a bet up to the value of a million.

A number of other bookmakers quickly moved to get in on the action and, while one Twitter user urged Hall to “go and have a lie down,” the odds makers appeared to be interested in the action. Whether the interested parties will be able to agree to terms isn’t yet clear, but it just goes to show that poker players will literally place a bet on anything if they feel they can get an edge.