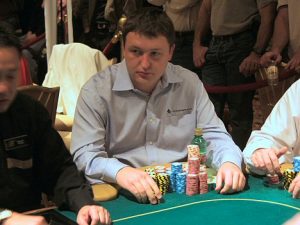 The always entertaining Tony G takes a break from his political career to teach some poker pros a lesson. (Image: flipchip/LasVegasVegas.com)

Tony G might have swapped poker showdowns for political dust-ups in recent months, but when a chance to play for big money on TV came calling he just couldn’t say no.

Over the last 12 months Tony G has become one of the leading lights in European politics thanks to his willingness to tackle sensitive issues with a clear and direct attitude.

In fact, since being elected to the European Parliament as Lithuania’s Alliance of Liberals and Democrats for Europe representative in 2014, G has become something of a star in the political world.

Back in May he was listed in Politico.eu’s 40 MEPs who actually matter thanks to his “charisma” and similarity to Donald Trump.

Following that moment in the spotlight, G was up to his old tricks again in June with a big money proposition for UK MEP, Nigel Farage.

As Brits were about to vote on whether they wanted to stay within the European Union (EU), G offered noted EU hater Farage a £1 million bet.

Confident that Britain would vote to stay in the EU, G stalked Farage via social media but wasn’t able to pin him down which is just as well as it would have cost him a lot of money.

With his political career going from strength-to-strength, G has little time to play poker like he used to, but on August 15 he decided to take part in King’s Casino’s high stakes cash game.

Part of a televised series featuring the top players in the world, the cash game was the perfect opportunity for G to ante-up in one of his favorite casinos.

Sitting alongside the likes of Dan Cates, Fedor Holz and Igor Kurganov, G has been imposing his will in typically bullish fashion.

In fact, after a heads-up game against WSOP Executive Director Ty Stewart, G tweeted a picture of the pair alongside King’s Casino owner Leon Tsoukernik with his trademark caption:

“I sent Ty Stewart on his bike after heads up battle – up up + away time to go.”

While G might not be planning a full return to poker, there’s no doubt he’s still got a passion for the game.

Who knows, if he can win enough money in his latest outing then we might get to see his antics a bit more in the coming months.