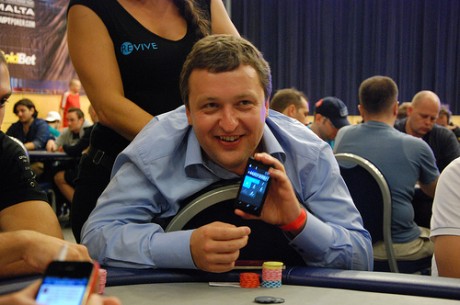 Antanas Guoga, known as Tony G in the poker world, sent a video message to Canadian Prime Minister Justin Trudeau. That message read: “I’ll take everything you have” in a game of poker.

Well, right up until he was asked to name his favorite Baltic nation. Instead of naming Estonia, Latvia, or Lithuania, he gave a strange answer, clearly showing he either needs a geography lesson or is a talented troll.

“That’s not a thing,” the PM answered, and then quickly moved on to the next question.

The globe, Wikipedia, history books, and Google suggest that Baltic nations are, indeed, a “thing.”

Trudeau’s odd answer got back to Tony G, now a Lithuanian politician. He didn’t think too highly of the apparent dig on his homeland.

The poker pro, along with a group of his fellow European Parliament members from other Baltic nations, created a Christmas-themed video (watch it below) in response to Trudeau’s gaffe. (Fair warning: after watching this video clip, we have a better understanding of why the Baltic region doesn’t list “entertainment” as one of its calling cards).

In the video, the group encouraged the Canadian Prime Minister to join them in participating in events popular in the Baltic region. If that isn’t to his liking, one speaker in the video invited Trudeau to catch a Toronto Raptors basketball game and see Lithuanian star Jonas Valanciunas play.

Of course, a long-time poker pro such as Tony G would rather just duke it out on the felt.

“Or if you prefer, Justin, just come and play poker with me,” Guoga challenged. “I’ll take everything you have.”

The Mouth from Down Under

Tony G’s poker challenge to PM Trudeau shouldn’t come as a surprise to anyone that has followed poker over the past decade.

He wasn’t dubbed “The Mouth from Down Under” and “The Australian Airbag” for nothing. Tony G spent much of his childhood and teen years in Australia, but was born in Lithuania, where he now lives.

During his poker career, Tony G has been known as a loud-mouthed player who isn’t afraid to show a bluff or tell his opponent’s what he thinks of their play. His style of play often rubs people the wrong way, but many poker fans enjoy watching him on TV.

Searching “Tony G poker” on YouTube brings up numerous videos that focus on Guoga verbally abusing and taunting other players. He’s even sparred with the “Poker Brat” Phil Hellmuth on multiple occasions.

Tony G has played in high stakes cash games and tournaments, including many televised poker events. He tends to keep the game lively and clearly is extremely confident, often letting his opponents “know” he’s better at poker than they are.

If the Canadian Prime Minister accepts his challenge, he will need a heavy dose of good fortune, because Tony G has shown he’s more than just talk. He has won big at the poker table many times.

Maybe he meant that “naming a favorite country” is not a thing. Actually, I found an article that describes how Canadians use the phrase “It’s not a thing”. Sandwiched somewhere in there is the following: “When Canadians say ‘it’s not a thing’, we are not necessarily referring to an actual materialistic object. Here is the spoiler: it means ‘it’s not an option’.”

More mouth from Tony G, what a surprise. He should just challenge Hellmuth to an all in for everything challenge already.