Tom Koral closed out June in a big way by winning his first World Series of Poker (WSOP) gold bracelet, which came in epic fashion after he overcome a significant chip disadvantage. And while that jewelry was the only piece of hardware awarded on Friday, there were plenty of other events playing out inside the Rio in Las Vegas. 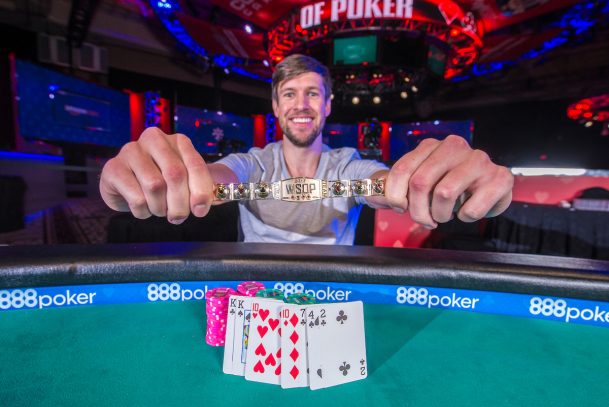 After 13 years of playing the WSOP, which includes garnering 53 cashes and five final tables, Illinois native Koral finally broke through. He did so in Event #55: $1,500 Seven-Card Stud, overcoming a 20-to-1 chip disadvantage in heads-up play to win $96,907.  The tournament drew an initial 298 players.

“Honestly, I still think it’s going to take a little bit to soak in,” the 33-year-old poker pro told WSOP officials after the win. “Finally, it happened … I love poker, I love the game, so it’s really a blessing to finally have a … bracelet. I know after a 13-year journey how hard it is to get one.”

Heads-up play began with Tsong Lin holding 2.1 million of the 2.2 million in play, but Koral worked his 125,000 up into the lead over the next several hours. It took five hours, but eventually Koral, who less than a week earlier finished fourth in Event #44: $3,000 HORSE for $74,382, eliminated his opponent to capture his first bracelet.

“In stud, you are basically anteing, but you really aren’t forced to play a big pot, if you have enough chips, unless you have to,” Koral continued. “A big part of my heads-up strategy was to just play very aggressively with the hands that I was going to play and basically trying to punish him as much as I could for playing too many hands.”

Event #56: $5,000 No-Limit Hold’em began with 623 players, but after Day 2 came to an end, only 32 remained, with Martin Czuczor (1.352 million) heading the counts. Not too far behind is MSPT Potawatomi champ and eight-time WSOP Circuit ring winner Ari Engel (977,000), who is seeking his first Series bracelet.

Luneau Out Front in Hi-Lo Mix

The remaining players will return on Saturday to play down to a winner, who will walk away with $215,902 and a gold bracelet.

Phil Hellmuth, Allen Cunningham, and Dominik Nitsche all hit the rails on Friday. Day 2 will get underway at noon Pacific Time on Saturday, with the plan of playing ten more 60-minute levels.

Things About to Get Crazy

Just one new tournament will kick off inside the Rio on Saturday with Event #60: $888 Crazy Eights No-Limit Hold’em 8-Handed. Featuring unlimited re-entry and a guaranteed $888,888 first-place prize, Saturday will see Flight 1A at 10 am PT, followed by 1B at 4 pm. Flights 1C and 1D will take place at the same time on Sunday.

Let’s not forget Event #61: $3,333 WSOP.com High Roller, today’s online event that plays out in a single day. CardsChat will be bringing you a standalone recap of that one tomorrow, along with all the other action, so come back with your coffee on Sunday to get caught up.

Tom Koral’s is a master because to overcome his opponent from 20 to 1, not anyone can do it, it is also interesting the strategy that is applied to achieve win over goliad.