The 888Live Poker Festival London wrapped up this weekend with the conclusion of its £1,100 ($1,450) buy-in main event, which attracted 427 entries over three starting flights. After a 12-and-a-half-hour day on Monday, the UK’s Tom Hall, a full-time grinder from Shrewsbury, England, prevailed to notch his third victory in less than a year, this one good for £78,888 ($103,930). 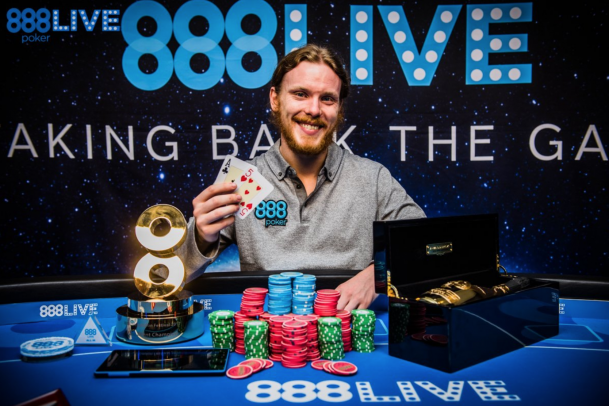 Rising Star: Tom Hall, seen here with his haul from 888Live London, has been on fire the past year. (Image: 888poker)

The 12-day 888Live London festival took place at Aspers Casino Westfield. It marked the first time an 888Live festival deployed “shot clocks” to speed up action, a development met with warm reception from players. On the final day, 17 players returned to action in the Main Event, including 888poker Ambassador and Twitch stud Parker “Tonkaaaa” Talbot, who recently participated in the King of the Hill II in Las Vegas.

Unfortunately for Talbot, who began the day on the shorter side of things, he wasn’t able to get much going. In Level 20 (10k/20k/2k), Talbot jammed his stack from late position with Q♣9♥ and Pascal Pflock called with A♦K♦.

But Talbot had two live cards, and he found one when the flop came J♠10♦9♦. However, Pflock had a lot of outs, one of which came on the Q♠ turn. Talbot was looking for another nine or queen on the river to sink Pflock’s Broadway straight, but the J♣ wasn’t it.

Talbot, the biggest name player to start the final day, finished in 15th place for £5,280 ($6,956). After his bustout he joined David Tuchman, Kara Scott, and Tiffany Michelle on the final table commentary team. There the crew would be watching another player whose name is likely to only grow in stature.

Tom Hall began the final table as a big chip leader, with a more than 2-1 stack advantage over his next closest competitor. On the other end of the spectrum, Ning Lu was the second-shortest stack, holding an eighth of what Hall had. Lu held on to make it to heads-up play against Hall, and not only that, he was the one who held a 2-1 chip lead by this point.

The deal wasn’t about just brining the battle to an end, however. The two would duke it out heads-up for more than three hours.

In what would be the final hand of the tournament, Lu got it all-in preflop with Q♣10♦, only to find out he was up against Hall’s A♣5♥. The board ran out 3♥Q♦A♦3♣4♠ and Hall’s aces and treys earned him the title.

It marked the third win for Tom Hall, who prior to the victory had $1,744,455 in live tournament earnings, in the past 11 months.