Tom Dwan, aka “durrrr,” has avoided the spotlight in recent years. But he has some thoughts to share about President Donald Trump, and share he did earlier this week. The same day, Doug Polk, whose online handle is WCGRider, went on his own You Tube rant, accusing the former Full Tilt Poker pro of scamming another poker player out of money. 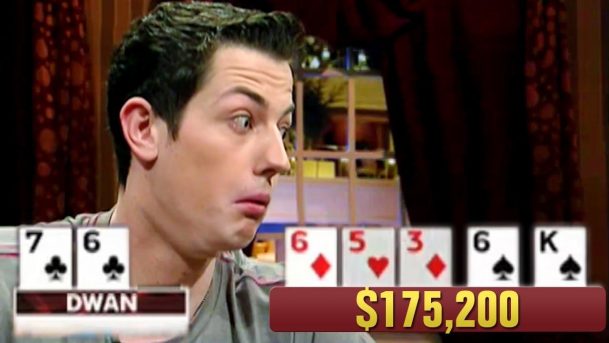 Tom Dwan (shown here acting shocked by the hand his opponent had in a vintage High Stakes Poker episode) made a rare social media appearance earlier this week to share his views on President Donald Trump. (Image: pokertube.com)

In a series of 14 tweets posted on March 7, with sentences that continue reading up from one post to the next, testing one’s ability to follow thoughts, Dwan opined his views that Trump may well have colluded with Russia. The president has been accused of working with the Russians to defeat his opponent Hillary Clinton in the recent election, and the poker pro seems to believe those allegations.

“My guess is they have something very damning on trump, and he knows it,” Dwan tweeted in a series of a posts. “So this wikileaks/cia/Russia bs that is now being advanced in trumpland is a way to set the stage for discrediting that when it comes out,” he continued.

He went on to position the billionaire businessman and former Atlantic City casino owner as an evil genius who is smarter than many of his detractors think. It was only the second time in nearly two years ‘durrrr’ had posted anything on Twitter.

And in other news, fellow pro Doug Polk has made some serious accusations about his high-profile antagonist.

On his YouTube channel, Polk has suggested that durrrr once scammed poker pro Haralabos Voulgaris out of more than $1 million. It needs to be noted, of course, that Polk is purely making an assumption.

In a 2015 podcast with Joe Ingram, Voulgaris said a “certain” poker player placed sports bets on his behalf through a bookmaker. He accused this unnamed person of either lying about placing the bets and subsequently pocketing the money for himself, or of refusing to pay Voulgaris on his winning bets.

The Canadian never did release the player’s name, but made it clear he was referring to a prominent poker pro. On Tuesday, Voulgaris posted an interesting message to Dwan on Twitter, leading Polk to suggest that perhaps durrrr was the scammer in question.

“Hey @TomDwan been trying to get a hold of you (I’m sure you can guess why) can you msh me with your correct contact info?,” he wrote.

Whatever Happened to the Durrrr Challenge, Anyway?

Dwan, one of the top online poker players ever, used to challenge anyone, (other than his friend Phil Galfond), to a heads-up battle. The first installment of the Durrrr Challenge was against Patrik Antonius. The next one was versus Dan “Jungleman” Cates, which began in 2010.

Jungleman got off to a hot start, owning Dwan’s soul for more than $1 million, but less than half of the agreed-upon 50,000 hands had been played. Then, after Black Friday in 2011, the challenge faded away.

Cates wanted to continue playing, but claims Dwan, for the past few years, has continually made excuses for why he can’t join in. Last summer, Polk referred to durrrr backing out of the contest as “the largest scam in poker history.”

Russ Hamilton’s detractors might disagree, but so it goes.

Tom Dwan should stick to losing money at poker. I hear he has become quite adept at that.