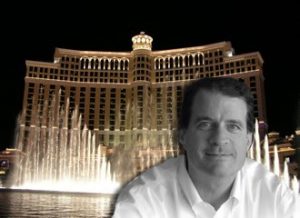 Look who’s back: Andy Beal was spotted in the Bellagio over the weekend, playing Todd Brunson for $5 million in the high-stakes Bobby’s Room. (Image: parttimepoker.com)

Andy Beal is back. The billionaire Texas banker, who was last seen scuttling from the Wynn in 2006 vowing that he was “done” with poker having taken a $16.6 million bruising at the hands of Phil Ivey, has returned to Las Vegas.

Brunson, of course, was a member of the Corporation, the loose consortium of pros that fought a series of high-stakes duels with Beal in the early to mid-noughties, immortalized by Michael Craig in the book The Professor, The Banker and The Suicide King.

The Beal versus the Corporation games have become the stuff of legend. Beal, a mathematical theoretician, real-estate developer, and owner of Dallas-based Beal Bank, first turned up in Vegas around 2001, demanding to play poker for the highest stakes known to man.

A team of pros, which included Doyle and Todd Brunson, Jennifer Harman, Howard Lederer, Gus Hansen, and Ted Forrest, assembled, pooled their resources, and took him on in a series of heads-up matches that lasted, off and on, until 2004.

This time, the Corporation got a huge scare. The stakes were $50,000/100,000. After five days of play in Las Vegas, Beal was stuck $3.3 million. He took a break and the games reconvened at the Wynn, where Beal went on a heater, winning $13.6 million over three days. With bankrolls and livelihoods on the line, a drastic plan was needed.

Ivey hadn’t been part of the original group, but now it was his job to dig the Corporation out of a massive financial hole, and he did. Playing $30,000/60,000 and $50,000/100,000, Ivey beat Beal for the aforementioned $16.6 million, allowing the Corporation to turn a profit and putting an end to Beal’s poker fixation.

Eight years after the Phil Ivey games, Beal was spotted in Bobby’s room squaring off against Todd Brunson, and both players had $5 million in front of them. Updates on the action were tweeted excitedly by poker player Kyle Loman, who happened to be watching through the glass doors.

This time it took just eight hours before every single pink chip was sitting in front of Brunson.

Whether this was a one-off match-up or the beginning of a bigger session, it’s impossible to say. But it seems a small appendix to one of the most fascinating stories in poker was delivered to us on Saturday night, via Twitter.

Man, I bet they love seeing this guy ride into town.

Haha calling Ivey to save the day