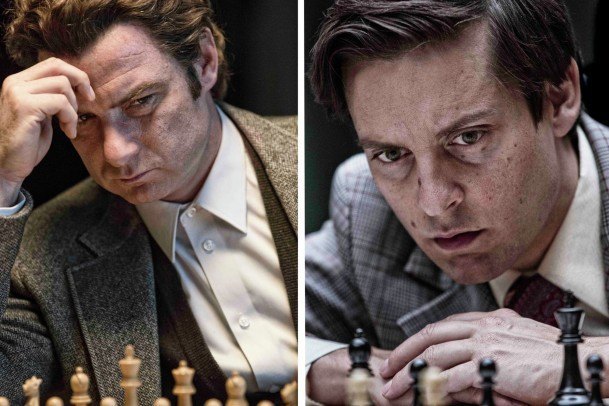 Tobey Maguire, right, stars with Liev Schreiber in Pawn Sacrifice, and draws comparisons between poker and chess in an interview about the Bobby Fischer biopic. (Image: nypost.com/Material Pictures)

Poker-loving Hollywood A-lister Tobey Maguire is currently on the promotion trail for his for upcoming chess biopic Pawn Sacrifice.

During a recent interview, the star well-known for his love of Hollywood nosebleed home games spoke about the connection between the two pastimes.

In fact, when it comes to Hollywood’s exclusive home games, Maguire is, reportedly, more than comfortable buying in for $100,000+.

Moreover, according to Molly Bloom who ran the top games in LA, he is also something of a tyrant at the table.

By all accounts, Maguire has a deep interest in poker and its nuances and he used some of this to help his recent portrayal of chess prodigy Bobby Fischer.

Discussing his inspiration during the filming of Pawn Sacrifice, Maguire told Examiner.com that it didn’t hurt to have an understanding of poker when portraying the chess legend.

However, in his opinion, the two games have a number of significant differences. Although poker and chess have been compared countless times in the past, Maguire believes there is a “huge differential” between the two mind sports, because one has hidden variables and the other doesn’t.

“[In poker] you have cards that I don’t see, so I’m then kind of mostly looking at your historical behaviors as it relates to betting,” said Maguire. “I do think it’s a huge differential because in chess there is no hidden information. On a chessboard all the information is right in front of you,” he added.

This opinion is vastly different to the comparisons people often draw between poker and chess. The common theme, even among chess-to-poker converts, is that the games are almost parallels of each other in terms of thought processes and strategy.

No Luck for Fischer

Maguire also feels that Fischer, who was a chess world champion and considered by many as the greatest player of all time, would not have enjoyed poker. Because of the element of imperfect information present in poker, Maguire believes that Fischer would have disliked the game and not wanted to play it professionally.

For anyone that’s ever played poker and chess at any serious level, there will undoubtedly be some crossover skills. However, for Maguire, he won’t be counting on these skills when he’s swapping $100,000 bets with some of Hollywood’s biggest stars.

Maguire’s latest film will go on general release on September 25.