Timothy Adams finished Day One of the WSOP Europe €250,000 Super High Roller on Wednesday below his starting stack. But he pulled off the most memorable bluff of the session, forcing Mikita Badziakouski off the best hand in a massive pot. 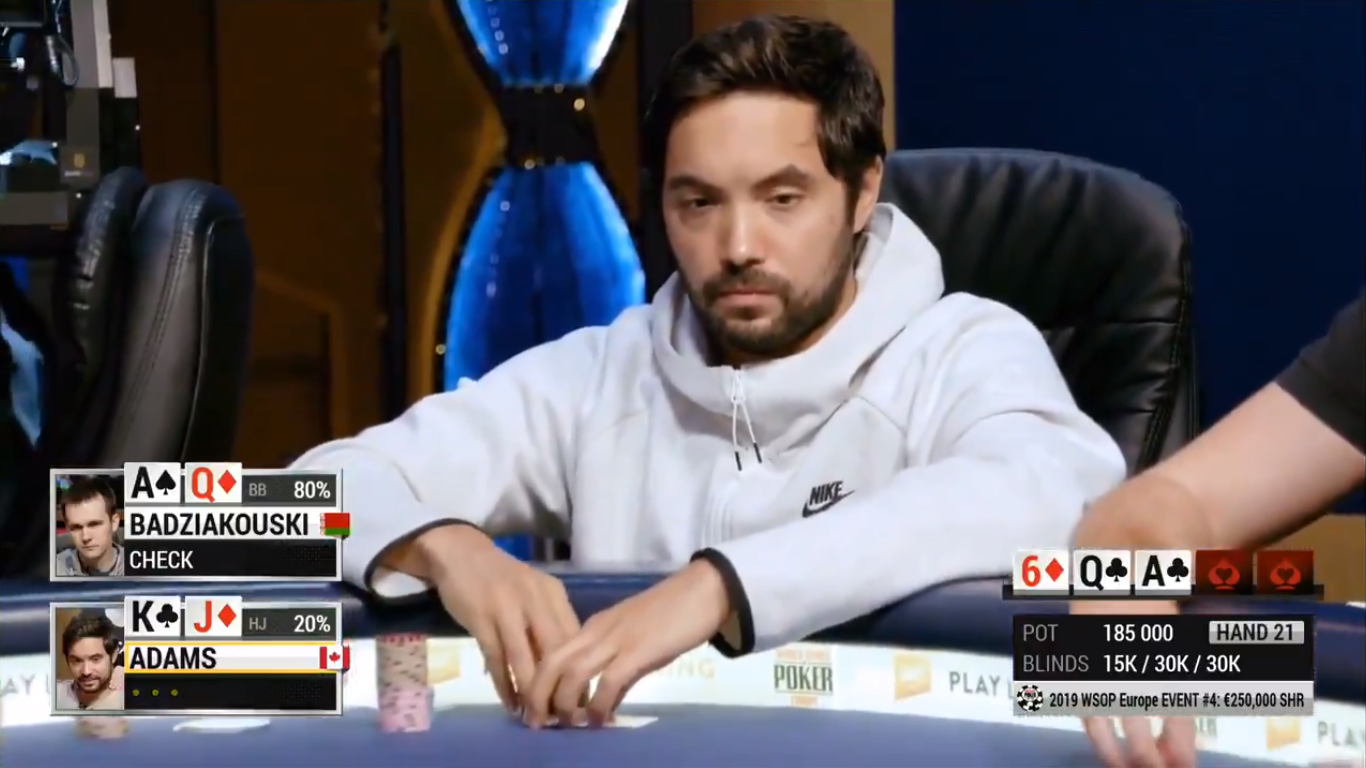 The Canadian poker pro is among 16 players who will return to King’s Resort on Thursday for Day Two. A total of 21 players entered the largest buy-in event in World Series of Poker Europe history.

James Chen bagged the biggest stack on Day One with 16,405,000. Blinds will jump to 60,000/120,000 with a 120,000 big blind ante when play resumes. Five players busted on Day One, including Cary Katz who, as we noted here at CardsChat, made a questionable decision with pocket aces early in the session. He never recovered and went home well short of the money.

Registration remains open until the end of the first level on Day Two. So, it’s likely the field of 21 will increase by at least a few players.

Timothy Adams Risks it All

Timothy Adams made it to Day Two with 4,170,000, below the 5 million-chip starting stack. But if one risky bluff against Mikita Badziakouski didn’t get through, he likely wouldn’t have any chips left right now.

A big bluff puts Mikita Badziakouski in the blender! ?️
What would you do in this @WSOP Europe €250K Super High Roller spot? https://t.co/5rUlItuiNK ?‍♂️ pic.twitter.com/r7WPT8AD46

Adams flopped a gut-shot straight draw, while Badziakouski had top-two-pair. Mikita went for a check-raise on the flop and his opponent called. Sneakily, he again checked the turn when a harmless deuce landed. It appeared he was about to go for the double check-raise. Instead, he just called when Adams bet 500,000.

The river brought a second deuce and also a third club. Badziakouski, however, didn’t have any clubs to serve as blockers. Holding the king of clubs, Timothy Adams realized he had a flush blocker and with so much already in the pot, he couldn’t just surrender the hand. King-high had no chance of winning at showdown. So, he made a massive bet of 4.6 million, enough to put Mikita all-in.

Badziakouski tanked for a couple of minutes before mucking his big hand of top-two-pair. The bluff worked out well for Timothy Adams, but he failed in another bluff attempt, this time losing a massive pot to Alex Foxen, the 2018 GPI Player of the Year.

Sometimes, your bluffs work. Other times they don’t…unless your name is Mike Postle and you can allegedly see your opponents cards.

where is check reraise on turn, check call with two biggest pairs …never in my life