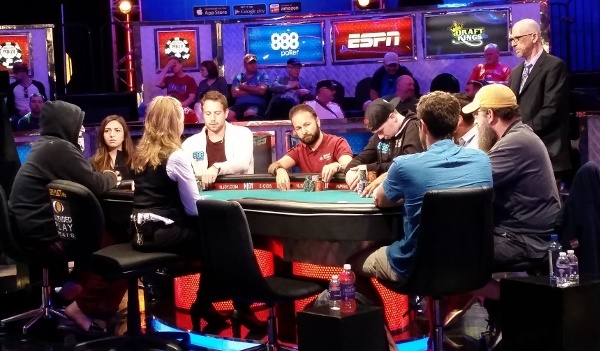 The World Series of Poker Main Event is down to its final 27 players, and at this point, everyone can smell the final table. And while many notables fell on Monday, one of poker’s biggest names is making a bid to make the November Nine and the first Main Event final table of his career.

You’ve probably never heard of Thomas Kearney, but there’s a good chance that you will be seeing a lot of him this November. Kearney is the chip leader going into Day 7 of the Main Event, bagging 14.4 million heading into the final day of summer play at the WSOP.

Kearney has three WSOP career cashes, two of which came this year, including a ninth place finish in this year’s $1,000 Pot Limit Omaha event. Right now, he only has $77,865 in cashes according to the Hendon Mob database, so to state the obvious, this Main Event run will earn him his largest career cash by a wide margin.

In today’s poker world, there are probably three names that attract more mainstream attention than any others. Of those three, Phil Ivey was eliminated early in this year’s Main Event, and Phil Hellmuth fell after making a run into the money.

But the third of poker’s biggest stars, Daniel Negreanu, is not only still alive, but appears to be in excellent position to make a run to the final table. At the end of play on Monday, Negreanu had accumulated nearly 8.5 million in chips, good for ninth position overall.

Negreanu has been in a solid position throughout most of the tournament, rarely finding himself at risk of elimination. It goes without saying that the six-time bracelet winner with over $30 million in career tournament earnings would bring a different level of excitement to the November Nine.

For Negreanu personally, it would also be the first time he would have made the Main Event final table (his highest finish in the event is 11th in 2001).

Other Notables Remain in Contention

While there is nobody else in the field that has the kind of popularity of Negreanu, there are a few other notables worth pointing out that are among the final 27.

First, there’s Max Steinberg, who is on one of the shorter stacks in the field with just under 3.3 million chips. Steinberg is the only other player in the field with a WSOP bracelet, and has more than $1.9 million in career earnings.

We’ve already talked about Pierre Neuville, the veteran of the European Poker Tour who already has 19 WSOP cashes in his career. Neuville is in the middle of the pack, having bagged 6 million chips at the end of Day 6.

Another player to keep an eye on is Fedor Holz. The German pro is currently 56th in the Global Poker Index world rankings, having scored big at a couple of EPT High Roller events this year, and having cashed three times at this year’s WSOP, including a 3rd place in the $10,000 Six-Handed No Limit Hold’em Championship.

Then there’s Blake Bohn, who has nearly $2 million in career earnings and seven career WSOP cashes.

With so few players still in the Main Event, it almost goes without saying that many poker kingpins were once again eliminated on Day 6. Justin Bonomo went down early in the day to fall in 64th place ($96,445), while Brian Hastings, who was among the chip leaders for most of the tournament, went out in 49th ($137,300).

The final woman in the field, Kelly Minkin, was one of the final eliminations of the day. Despite climbing from a short stack to one of the leaders for much of Monday’s session, Minkin would ultimately go out in 29th place, winning $211,821.

Others to be eliminated on Day 6 included Matt Jarvis, Amar Anand, Max Greenwood, and Mark Kroon, who had Phil Hellmuth on his rail for much of the day.

Today, the Main Event has no time limit. Instead, players will compete until they have reached the November Nine.

The pace of play has been rather fast, but it is still likely to take most of the day for this to happen, and with no hard stop time tonight, it could be a late night for the last few players trying to grab a final table slot.

But for those who make it, there are major rewards: over $1 million in prize money, not to mention a four-month break before they come back to try to win a Main Event title. Find out tomorrow who will make up the 2015 November Nine: we will post the final table results shortly after the event wraps up.