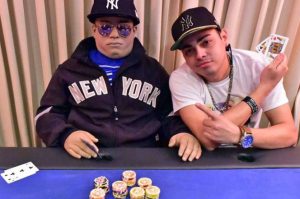 A dead poker player was embalmed and propped up in a chair at a poker table along with his living loved ones. (Image: Barstoolsports.com)

A dead poker player played his last live cash game, albeit in a taxidermied state. And no, this isn’t an Onion story, as crazy as it sounds. Nor is it a part of a Weekend at Bernie’s sequel. It’s real, and it’s nuttier than a Charlie Sheen rant.

In fact, we may already have the winner of the “Strangest Poker-Related Story of 2016,” and the year has just begun. Unless something completely outrageous occurs between now and December 31st, go ahead and send the friends and family of Henry Rosario Martinez the trophy.

Martinez, a Puerto Rican native, passed away last week from an unfortunate alcohol and pill overdose. He was also known as an avid poker player. Following his passing, his loved ones decided they wanted to give him a fitting tribute. What they did was so, um, outside the box, that even Jose Melendez, the owner of the funeral home, said it was something he had never been asked to do before.

They wanted Henry to take his place one last time at the felt with all of them before cashed out forever. With that in mind, Martinez’ friends and family took one last picture and video of their deceased buddy Henry, while seated around him at a poker table.

After embalming, Martinez was dressed up in a New York Yankees hat and jacket and then propped up in a chair at a poker table surrounded by members of his family and friends. The group snapped photos and a video with Martinez one last time.

Run with all the “stiffed the dealer,” “dead hand,” and “slow play” jokes you want here, folks.

Those in the picture had poker chips and playing cards in front of them, as if they were playing a real poker game. No word on if anyone at the table called the clock on Martinez, though.

Martinez didn’t die at the table, but his final moments at one has some historical competition with the man behind the origin of “Dead Man’s Hand,” Aces and Eights: “Wild Bill” Hickok himself.

Wild Bill was a gunslinger in the 1800s and eventually became famous in the poker world for a memorable hand he would like to forget, but not because of a sick bad beat or a Phil Hellmuth-like meltdown.

In an 1876 draw poker game, Hickok held a strong two-pair hand with aces and eights. This is now referred to as “dead man’s hand,” as Wild Bill was shot in the back and killed during the hand. Or, at least, that’s the story that has been told for many years.

You Gotta Know When to Fold ‘Em

Another interesting table story involves the recently deceased Paul “Eskimo” Clark, a three-time WSOP bracelet winner and one of the best poker players in the 1990s. His career went downhill in the last decade of his career, however, as his health deteriorated.

And Eskimo’s hard-living lifestyle finally got the best of him in April 2015, although word of his passing didn’t get around until June.

Although Eskimo didn’t die at the poker table, he could have. Back in 2007 during a WSOP event, the man known for his scruffy beard and recognizable mullet collapsed multiple times but refused to quit the tournament. Oddly enough, he finished 4th.

Killed for His Winnings

Another poker player whose life ended badly (and sadly) was Mehmet Hassan of London. Having just won £3,000 in a poker tournament in early 2015, Hassan’s supposed girlfriend, Leonie Granger, soon after conspired to have him killed for his winnings.

Accomplices were waiting for Hassan in his home and proceeded to beat him to death upon arrival. They even coldheartedly took a video with the money they’d stolen, while he lay in a pool of blood dying. That evidence helped to convict the killers just two months later.

Easy Dead money. Ok I’m wrong for that one.

I will say it will be better to have the actual picture of the dead man at the Poker Table, the picture in the news is of a Dominoes hand so is a little out of order.