Football fans will be able to feast on more than just turkey this Thanksgiving, as the NFL has three intriguing games on the schedule throughout the day on Thursday. 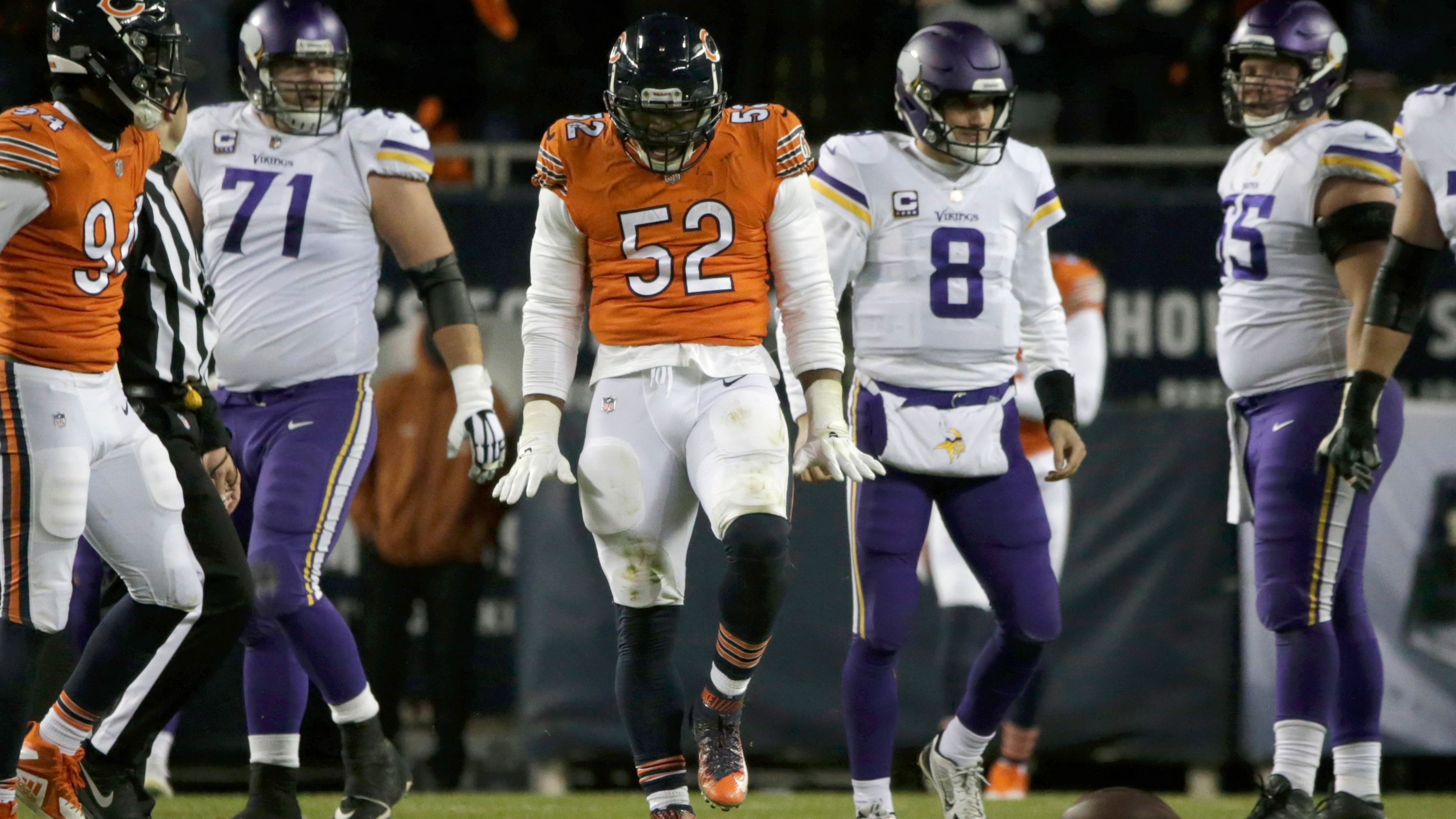 Khalil Mack (52) and the Chicago Bears will look to extend their division lead by beating the Detroit Lions on Thanksgiving. (Image: David Banks/AP)

All three matchups feature NFC divisional leaders taking on traditional rivals who will be looking to throw a wrench into the plans of what appear to be playoff-bound teams.

The action starts at 12:30 pm Eastern, when the Detroit Lions (4-6) host the NFC North leading Chicago Bears (7-3). The Westgate Las Vegas SuperBook has the visiting Bears as a three-point favorite heading into Detroit’s traditional Thanksgiving tilt.

One of the biggest challenges of playing on any Thursday is the short turnaround time. But the Bears will have a particularly quick recovery period, as they are coming off a Sunday night win over the Minnesota Vikings.

“I don’t think there are many coaches or players that have ever been through a Sunday night game to a day game on a Thursday, but that’s what it is,” Chicago head coach Matt Nagy told reporters on Monday.

According to the Elias Sports Bureau, Nagy is right: the Bears will be the first team since 1970 to play at 1 pm or earlier on just three days rest.

The Bears just played the Lions two weeks ago, beating Detroit 34-22 at home. Nagy says that he’ll do what he can to get his team ready for the rematch.

“They’re on a short week, too,” Nagy said. “To me, there’s no advantage or disadvantage either way.”

The second Thanksgiving game sees the Washington Redskins (6-4) travel to take on the Dallas Cowboys (5-5) in a game that could play a major role in determining the winner of the NFC East. At the moment, all four teams in the division still have some chance of coming out on top, making every divisional game critical going forward.

The Redskins will have to try to move on without quarterback Alex Smith, who will undergo season-ending surgery after breaking his right leg in Sunday’s loss to the Houston Texans.

“I think the quick turnaround helps us to not think this is going to be bad,” running back Chris Thompson told the Washington Post. “We don’t have time to mourn.”

The injury, combined with Dallas’ home field advantage, has made the Cowboys a touchdown favorite over the division leaders.

To wrap up the day, the New Orleans Saints (9-1) will host the Atlanta Falcons (4-6) on Thursday night. New Orleans is a 13-point favorite in a game that promises to have plenty of offense: the over-under has been set at 60.5 points, a total rarely seen in NFL games.

While the Falcons might have a lot of work to do if they want to keep up with the high-powered Saints offense, quarterback Matt Ryan thinks Atlanta will be able to bounce back quickly.

“Having done this so many times throughout my career I’m comfortable in it,” Ryan told the Atlanta Journal-Constitution. “I think the biggest thing is getting our young guys to understand what it takes to get themselves prepared and ready to play on the short week.”