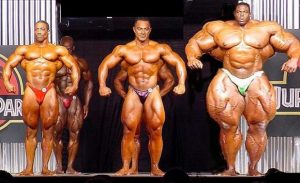 Testosterone inhibits poker prowess, according to a new scientific study, which is good news for female poker players everywhere but might be bad news for Dan Bilzerian.

The study, by the Department of Psychology at the University of Utrecht in the Netherlands, sought to determine the effects of testosterone on human behavior, and whether the hormone deserved the negative characteristics associated with it, characteristics such as “economically egoistic and materialistic behaviors.” And blowing stuff up in the desert.

As the researchers point out, the problem is that since “social status and economic resources are inextricably intertwined in humans … testosterone’s primal motives are concealed.”

Furthermore, testosterone has also been associated by some scientists with “economically fair, generous and cooperative behaviors,” driven by “reputable status seeking.”

So which is it? Testosterone is known to motivate (mostly male, but also some female) individuals to strive for social dominance, a phenomenon that has been observed from countless experiments on all kinds of animals from rats to hairy primates, not to mention their slightly less hirsute cousins.

But in human terms, is this testosterone-fueled social dominance achieved through brash, reckless egoism, or a more measured and cooperative approach?

The University of Utrecht decided to settle the matter once and for all with a good old-fashioned game of poker, and the results were surprising.

Twenty female volunteers were given either a testosterone lozenge or a placebo, before being asked to play a simplified computerized heads-up poker game.

Upon receiving their cards, players were told to make a hidden bet, either high or low. If the bets were then revealed to be equal in value, cards were turned over and the winning hand took the pot.

If there was a discrepancy between the bets, the player who had bet lower would be offered the chance to match the higher bet (call) for a showdown, or to fold.

The best strategy is based on the Nash Equilibrium, as the researchers explained:

“The most profitable strategy for placing a bet depends on the strength of the hand. For a sufficiently strong hand, the player should always bid high. For weaker hands the player should bid irregularly high and low … to create uncertainty, and consequently protect the player against deviations from the equilibrium strategy of the opponent.

“In particular, the player should bet mostly ‘low’ on weaker hands … However, according to the [Nash] equilibrium, strategy players should place irregularly randomly distributed bluffs.”

The one thing that a player should never, ever do is call, as this is the least profitable long-term strategy. Thus, the optimal strategy of the game is designed to be disadvantageous for those seeking reputable status through cooperative behaviors.

While calling is the “nicest” option, bluffing would subject such players to the risk of being caught cheating, leading to reputational damage.

The results of the experiment? You guessed it: those players dosed up to the eyeballs on testosterone were way less “bluffy” and way more “cally” than those who took the placebo, leading researchers to conclude that testosterone may actually make us “risk averse.”

Fascinating stuff, but what have we learned? Well, 1) women officially make the best poker players (but we suspected that anyway); and 2) whatever inspires Dan Bilzerian’s behavior, it’s probably not hormonal.