Police raided a thrice-weekly poker game being run out of a Candlewood Suites hotel room in Smyrna, Tennessee, a small town outside of Nashville. The operation, according to police, was more than just a home game among friends. 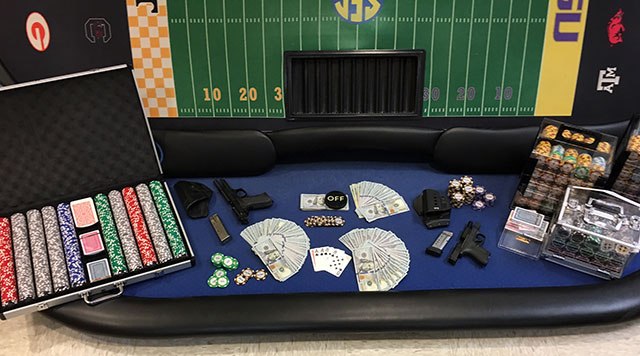 Police busted in on surprised players Tuesday night at around 10 pm, with a tournament in progress. They seized money, guns, poker chips, and a small amount of marijuana. The value of the items seized totaled approximately $18,000.

“I don’t know the exact amount of money being transferred,” Smyrna Police Sgt. Bobby Gibson told Tennessee’s Fox 17. “We did have several people involved. We interviewed them they said they had lost and won money in the thousands.”

Russell Hairr, 39, and George Barton, 39, are accused of organizing a regular poker game that included alcohol and a buffet. They each face two charges of aggravated promotion of gambling and possession of gambling devices. Both were transported to the Rutherford County jail, where they were being held on bonds of $22,000 and $32,000, respectively

The game allegedly took place three times a week. The Candlewood Suites was one of two places police raided on Tuesday night. Details about the other location have not yet been disclosed.

Police say others could end up facing charges depending on what their ongoing investigation finds.

Police believed the hotel poker game in Smyrna was dangerous.

“Anytime something like that is going on,” Gibson said, “[when] we have drugs, [and] we have money with firearms, it’s a safety concern for us.”

Gibson added that the presence of money and guns could lead to “violent encounters” when a player loses.

The hotel isn’t under investigation and is cooperating with police. The two individuals arrested were guests of the hotel, not employees.

“Secret” underground poker rooms are not uncommon around the country. While often police do not close these games down if the public isn’t complaining, they do at times raid rooms in jurisdictions where the games are obviously more than a home game, and usually in clear violation of state gambling laws.

Tennessee saw previous crackdowns of underground poker rooms in 2008 and 2006, as a global poker “boom” made professionally organized low-stakes games common. Though the popularity of such card rooms has dwindled, the games people want to play never fully went away.

More recently, in 2016, five people in Phoenix were arrested for hosting a $2-$5 cash game, which Arizona gaming authorities and Phoenix police dubbed an illegal card room operation. The accused in that still-pending case were charged with racketeering, promotion of illegal gambling, and operating an illegal gaming facility.

the state don’t like it when they don’t get there cut.
thank god there was no violent encounters with guns and money mixed lol.
the whiny sore losers just went to the cops instead