Ted Forrest faced a judge in Clark County, Nevada after being arrested on charges of alleged theft and writing bad checks, both felonies. The 51-year old was granted the right to remain a free man on bond, at least until a preliminary hearing scheduled for October 18. 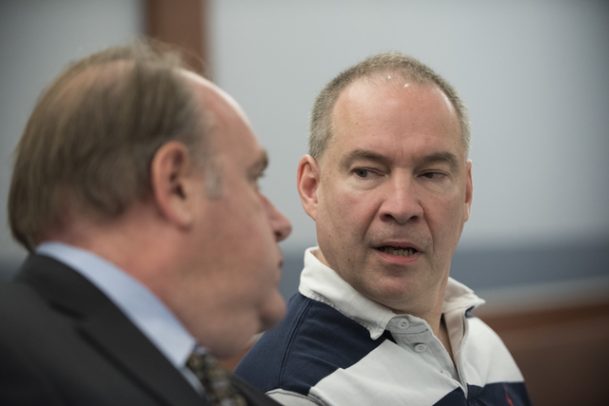 The purpose of the hearing will be to determine where the case will be tried. Forrest is facing a much tougher task than attempting to stack Phil Ivey or Daniel Negreanu this time.

If convicted, the New York native could receive up to 14 years in prison. Instead of playing poker for thousands of dollars in Ivey’s Room at Aria in Las Vegas, Forrest may end up playing for cigarettes with O.J. Simpson at the Lovelock Correctional Center in the northern Nevada desert, if he doesn’t beat these charges.

The player, who’s won more than $6 million in live tournaments, is accused of writing bad checks to the Wynn Casino on the Las Vegas Strip. In total, the checks added up to $215,000 from 2012 to 2013. His attorney, Chris Rasmussen, believes this should be a civil case, claiming it doesn’t warrant criminal charges.

“It was a loan. He didn’t commit a crime,” the lawyer told the Las Vegas Sun. “They sent him to the bank to open a $100 bank account. They knew he didn’t have the money. And now they take years to prosecute.”

Gamblers are often granted “markers,” which is basically the casino’s equivalent of a pre-approved loan. They use these markers to place bets in the casino, but are required to pay the house back. According to the Wynn, Forrest has refused to do so. In Nevada, a state where gambling fuels the economy, failing to pay back a marker can actually land someone in jail.

In other states, these scenarios are treated much like owing a debt to a credit card company. But in Nevada, instead of receiving a call from a debt collector, a police officer might knock on your door and haul you away to the county jail. Still, Forrest’s lawyer believes this is a civil matter. Ted will have his day in court to try to prove this argument.

His Mark as a Player

William “Ted” Forrest is far more than an accused felon, of course. He has long been one of the most feared players at stud poker tables, but can also hold his own in hold’em and mixed games.

Since 1993, he’s won six World Series of Poker bracelets. Forrest has more than $2 million in lifetime WSOP cashes alone. His last bracelet came in a $1,500 Razz event in 2014. At this year’s World Series, he cashed in three events, including a 4th place finish in Event #3, the $10,000 Seven Card Stud Championship.

How could he even let it get this far?? I don’t understand his thought process.