Team CardsChat Scheduled to Play Little One for One Drop
June 30, 2014 CardsChat Community

Team CardsChat Scheduled to Play Little One for One Drop 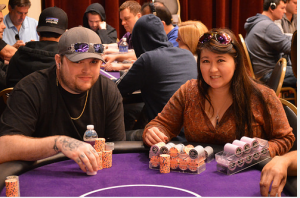 Team CardsChat members Kristin Ting and Rex Clinkscales preparing for a deep Little One for One Drop run.

The Little One for One Drop is a unique tournament offered by the World Series of Poker. The idea stemmed from a partnership between the WSOP and Guy Laliberté’s One Drop foundation, as part of the buy-in goes to help fund the charity with the goal of providing access to water throughout the world.

This year, CardsChat has formed a strong team of players who will play the Little One for One Drop as a part of Team CardsChat. With ten percent of each $1,111 buy-in going to One Drop, the group of 16 players is feeling generous, but that stops when chips are in play and the WSOP bracelet is on the line.

Who is Team CardsChat?

There are 16 members of the team, and they all have poker tournament experience.

The leader of Team CardsChat is Debi O’Neill, the person that CardsChat members and fans have come to know as Forum Administrator and all-around supporter of poker. She also has all of the hoodies for the Little One for One Drop tournament, so she gets to be the team leader.

Members of Team CardsChat are excited to play in the WSOP tournament. The rest of us can follow along with them in the rail thread on CardsChat and on their personal Twitter accounts, or on the CardsChat Facebook page, as we cheer them on. (Note their CardsChat forum names in parentheses.)

The purpose of organizing this team with such a wide range of players is to represent the community and show how poker can be much more than a solitary game. The friendships formed in poker can be lifelong ones, and players who support one another have more fun. This is a statistical fact, probably.

This group of players is representing a larger community. Since not everyone can get to the World Series of Poker, others can live vicariously through those who can and enjoy one of the most exciting tournaments of the year from a unique perspective.

The Little One for One Drop, also known as WSOP Event 62, begins on Wednesday, July 2. There are two starting days – the first at noon on July 2 and the second at noon on July 3. The tournament will then bring back some survivors for Day 2, with the final table scheduled for July 5.

Please join us in the forum to cheer on our team and follow along with their experiences!

OTR for the CC team!